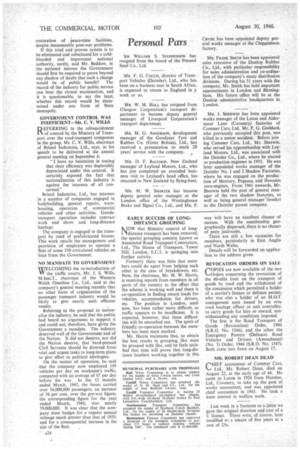 SIR WILLIAM S. STEPHENSON has resigned from the board of the Pressed Steel Co., Ltd.

MR. F. G. Comm, director of Transport Vehicles (Daimler), Ltd., who has been on a business tour in South Africa, is expected to return to England in a week or so.

Formerly there was little that members could do apart from helping each other in the case of breakdowns, etc. Now, the chairman, Mr. M. W. Harris, is receiving reports from members in all parts of the country to the effect that the scheme is working well and there is co-operation in finding return loads for vehicles, accommodation for drivers, etc. The position in London, until now, has been rather more difficult, as traffic appears to be insufficient. It is expected, however, that these difficulties will be smoothed out. The spirit-of friendly co-operation between the members has been most marked.

Mr. Harris maintains that, to obtain the best results in grouping, like must be grouped with like, and he feels satisfied that time will prove that long-distance hauliers working together in this CRUSE has been appointed deputy general works manager at the Chippenham factory.

MRFRANK Stem has been appointed sales executive of the Dunlop Rubber Co.. Ltd., with particular responsibility for sales administration and co-ordination of the company's many distributive divisions. During his 31 years with the company, Mr. Smith has held important appointments in London and Birmingham. His future office will be at the Dunlop administrative headquarters in London.

MR. J. SHF-RWIN has been appointed works manager of the Luton and Aldermoor Lane (Coventry) factories of Commer Cars, Ltd. Mr. F. G. Goddard, who previously occupied this post, was killed in a motor accident. Before join ing Commer Cars, Ltd., Mr. Sherwin, who served his apprenticeship with Leyland Motors. Ltd., was associated with the Daimler Co., Ltd., where he started as production engineer in 1935. He was later appointed works manager of the Daimler No. 1 and 2 Shadow Factories, where he was engaged on the produc• tion of Mercury. Pegasus, and Hercules aero-engines. From 1941 onwards, Mr. Sherwin held the post of general manager of the two shadow factories, as well as being general manager (works) to the Daimler parent company.

way will have an excellent chance of success. With the membership geographically dispersed, there is no chance of petty jealousies.

There are still a few vacancies for members, particularly in East Anglia and North Wales.

Details will be forwarded on application to the address given.

CONES are now available of the two Orders concerning the revocation of the 60-mile limit on the transport of goods by road and the withdrawal of the concession which permitted a holder of a carrier's licence or defence permit, who was also a holder of an M.O.T. consignment note issued by an area road haulage officer or unit controller, to carry goods for hire or reward, notwithstanding any conditions imposed.

CHIEF accountant of Commer Cars, %.-.• Ltd., Mr. Robert Dean, died on August 22, at the early age of 46. He came to Luton in 1926 from Humber, Ltd., Coventry, to take up the post of works accountant, and was appointed chief accountant in 1943. He took a keen interest in welfare work.

Last week in a footnote to a letter we gave the original duration and cost-of a C licence. These were, of course, later modified to a tenure of five years at a cost of 25s.