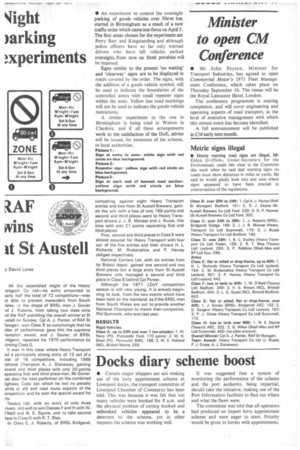 Page 19, 30th April 1971 — ZAF wins it St Austell
Close
Noticed an error?
If you've noticed an error in this article please click here to report it so we can fix it.
Keywords : St Austell, Associated Equipment Company

y David Lowe All the assembled might of the Heavy

-ansport Co Ltd—its entry amounted to aarly half the total of 72 competitors—was ot able to prevent marauders from South /ales, in the shape of BRSL men J. Govier rid J. Roberts, from taking two class wins rid the RAF providing the overall winner at St ustell on Sunday. Col A. J. Ranter, of RAF St 1awgan, won Class B so convincingly that his idex of performance gave him the supreme hampion award, and J. Govier, of BRSL ridgend, repeated his 1970 performance by tinning Class G.

It was in this class where Heavy Transport ad a particularly strong entry of 13 out of a )tal of 16 competitors, including 1956 lational Champion A. J. Stanaway, gaining econd and third places with only 20 points eparating first and third place men. Mr Govier as also the best performer on the combined lighway Code (on which he lost no penalty oints at all) and road route aspects of the ompetition and he won the special award for tis.

Texaco Ltd, with an entry of only three rivers, did well to win Classes F and H with W. )'Neill and N. E. Squire, and to take second lace in Class 13 with R. T. Blee.

First, second and third places in Class E were almost assured for Heavy Transport with four out of the five entries and their drivers H. L. Richards, M. Brokenshire and P. Harvey obliged respectively.

National Carriers Ltd, with six entries from its Bristol depot, gained one second and two third places but a large entry from St Austell Brewery only managed a second and third place in Class B behind Cpl Panter.

Although the 1971 LOoY competition season is still very young, it is already beginning to look from the two events which have been held on the mainland, as if the BRSL men from South Wales are out to provide another National Champion to match their compatriot, Phil Symonds, who won last year.