Build up in Nottingham 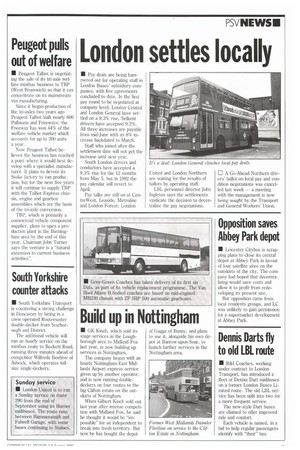 Page 17, 2th August 1990 — Build up in Nottingham
Close
Noticed an error?
If you've noticed an error in this article please click here to report it so we can fix it.
Keywords : Nottingham, Loughborough, West Bridgford, Premiere Travel

• GK Kinch, which sold its stage services in the Loughborough area to Midland Fox last year, is now building up services in Nottingham.

The company began with an hourly Nottingham-East Midlands Airport express service given up by another operator, and is now running doubledeckers on four routes to the big Clifton estate on the outskirts of Nottingham.

When Gilbert Kinch sold out last year after intense competition with Midland Fox, he said he thought it would be "impossible" for an independent to break into fresh territory. But now he has bought the depot of Gaggs of Bunny, and plans to use it, alongside his own depot at Barrow-upon-Soar, to launch further services in the Nottingham area.