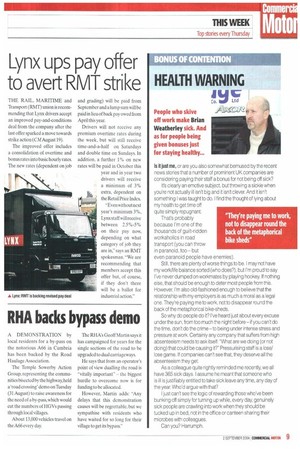 Page 9, 2nd September 2004 — Lynx ups pay offer to avert RMT strike
Close
Noticed an error?
If you've noticed an error in this article please click here to report it so we can fix it.

THE RAIL, MARITIME and Transport (RMT) union is recommending that Lynx drivers accept an improved pay-and-conditions deal from the company after the last offer sparked a move towards strike action (CMAugust 19).

The improved offer includes a consolidation of overtime and bonus rates into basic hourly rates. The new rates (dependent on job and grading) will be paid from September and a lump sum will be paid in lieu of back pay owed from April this year.

Drivers will not receive any premium overtime rates during the week, but will still receive time-and-a-half on Saturdays and double time on Sundays. In addition, a further 1% on new rates will be paid in October this year and in year two drivers will receive a minimum of 3% extra, dependent on the Retail Price Index.

"Evenwithout next year's minimum 3%, Lynx staff will receive between 2.5%-5% on their pay now, depending on what category of job they are in," says an RMT spokesman. "We are recommending that members accept this offer but, of course, if they don't there will be a ballot for industrial action."