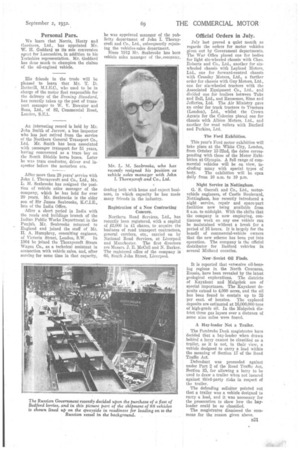 We learn that Norris, Henty and Gardners, Ltd., has appointed Mr. W. U. Goddard as its sole conversion agent for Lancashire, in addition to his Yorkshire representation. Mr. Goddard has done much to champion the claims of the oil-engined vehicle.

His friends in the trade will be pleased to learn that Mr. T. D. Botterill, 1VLI.E.C., who used to be in charge of the motor fleet responsible for the delivery of the Evening Standard, bas recently taken up the post of transport manager to W. V. 'Bowater and Sons, Ltd., of 82, Commercial Road, London, S.E.1.

An interesting record is held by Mr. John Smith of Jarrow, a bus inspector who has just retired from the service of the Northern General Transport Co., Ltd. Mr. Smith has been associated with passenger transport for 51 years, having commenced as a trace boy on the South Shields horse buses. Later he was train conductor, driver and inspector before the motorbus era.

After more than 28 years' service with John I. Thornycroft and Co., Ltd., Mr. L. M. Seabrooke has resigned the position of vehicle sales manager of the company, which he has held for over 20 years. Mr. Seabrooke is the elder son of Sir James Seabrooke, K.C.I.E., late of the India Office.

After a short period in India with the roads and buildings branch of the Indian Public Works Department in the Punjab, Mr. Seahrooke returned to England and joined the staff of Mr. H. A. Humphrey, consulting engineer, of Victoria Street, London, S.W. In 1904 he joined the Thornycroft Steam Wagon Co., as a technical assistant in connection with vehicle sales, and, after serving for some time in that capacity, he was appointed manager of the publicity department of John I, Thornycroft and Co., Ltd., subsequently rejoining the vehicles-sales department.

Since 1912 Mr. Seabrooke has been vehicle sales manager of the,company, dealing both with home and export business, in which capacity he has made many friends in the industry.

Registration of a New Contracting Concern.

Northern Road Services, Ltd., has recently been registered, with a capital of £2,000 in £1 shares, to acquire the business of road transport contractors, general carriers, etc., carried on by National Road Services, at Liverpool and Manchester. The first director are Messrs. J. E. McColl and N. Barker. The registered office of the company is 60, South John Street, LiverpooL

This year's Ford motor exhibition will take place at the White City, London, from October 13-22nd, the dates corresponding with those of the Motor Exhibition at Olympia. A full range of commercial vehicles will be on view, including many with special types of body. The exhibition will be open daily from 10 a.m. to 10 p.m.

G.' S. Oscroft and Co., Ltd., motorvehicle engineers, of Castle Boulevard, Nottingham, has recently introduced a night service, repair and spare-part facilities now being available from 8 a.m. to midnight. With the shifts that the company is now employing, continuous work on any one vehicle can be maintained without a break for a period of 16 hours. It is largely for the benefit of commercial-vehicle owners that the new scheme has been put into operation. The company is the official distributor for Bedford vehicles in several Midland counties.

It is reported that extesisive oil-bearing regions in the North Caucasus, Russia, have been revealed by the latest geological explorations. The districts of Kayakent and Malgobek are of special importance. The Kayakent deposits extend to 4,000 acres, and the oil has been found to contain up to 35 per cent. of benzine. The explored deposits are estimated at 16,000,000 tons of high-grade oil. In the Malgobek district three gas layers over a distance of some nine miles were found.

A Hay-loader Not a Trailer.

The Pembroke Dock magistrates have decided that a hay-loader when drawn behind a lorry cannot be classified as a trailer, as it is not, in their view, a vehicle designed to carry a load within the meaning of Section 17 of the Road Traffic Act.

Defendant was proceeded against under Part 2 of the Road Traffic Act, Section 35, for allowing a lorry to be used to draw a trailer when not insured against third-party risks in respect of the trailer.

The defending solicitor pointed out that a trailer was a vehicle designed to carry a load, and it was necessary for the prosecution to show how the hayloader could be so classified.

The magistrates dismissed the summons for the reason given above.