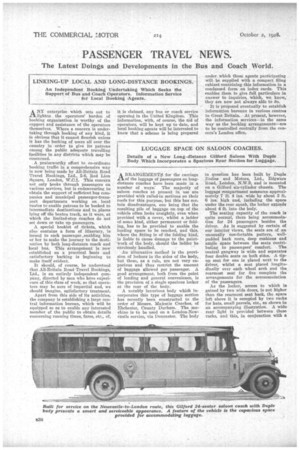 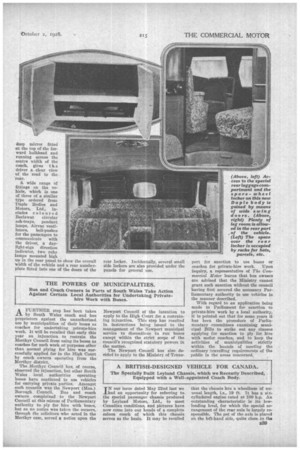 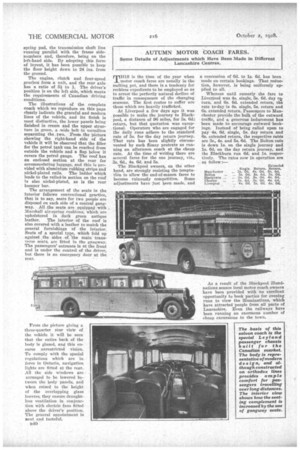 Page 22, 2nd October 1928 — LUGGAGE SPACE ON SALOON COACHES.
Close
Noticed an error?
If you've noticed an error in this article please click here to report it so we can fix it.

Details of a New Long-distance Gifford Saloon With Duple Body Which Incorporates a Spacious Rear Section for Luggage.

ABRANGENIENTO for the carriage .of the luggage of passengers on longdistance coaches have been made in a number of ways: The majority of saloon coaches at present in use are provided with railed-in sections on their roofs for this purpose, but this has certain disadvantages, one being that the resulting pile of baggage on top of the vehicle often looks unsightly, even when provided with a cover, whilst a ladder of some kind, either permanent or folding, has to be . provided to enable the loading space to be reached, and this, where the fitting is of the folding kind, is liable to cause damage to the paintwork of the body, should the ladder be carelessly handled:

• An alternative method is the provision of lockers in the sides of the body, but these, as a rule, are not very capacious and thus restrict the amount of baggage allowed per passenger. A good arrangement, both from the point of loading and general convenience, is the provision of a single spacious locker at the rear of the body.

A notably luxurious body which incorporates this type of luggage section has recently been constructed to the order of Messrs. Majestic Coaches, of Ebchester, County Durham. The machine is to be need on a London-Newcastle service, via Doncaster. The body

in question has been built by Duple Bodies and Motors, Ltd., Edgware Road, London, N.W.9, and is mounted on a Gilford six-cylinder chassis. The luggage compartment measures approximately 7 ft. 4 ins, wide by about 3 ft. 6 ins, high and, including the space under the rear squab, the locker extends about 4 ft. into the body.

The seating capacity of the coach is quite normal, there being accommodation for 24 passengers besides the driver. As is suggested by certain of our interior views, the seats are of an unusually comfortable pattern, wellpadded back rests, deep cushions and arnyile space between the seats contributing to passengers' comfort. The central gangway is wide and separates four double seats on both sides. A tipup seat for one is placed next to the driver, whilst a Seat placed longitudinally over each wheel arch and the rearmost seat for five complete the arrangements for the accommodation of the passengers.

As the locker, access to which is gained by two wide doors, is not higher than the rearmost seat back, the space left above it is occupied by two racks for hats, small parcels, etc., as shown in an accompanying illustration. A wide rear light is provided between these racks, and this, in conjunction with a deep mirror fitted at the top of the forward bulkhead and running across the centre width of the coach, gives t h e driver a clear view of the road to the rear.

A wide range of fittings on the vehicle, which is one of three of a similar type ordered from Duple Bodies and Motors, Ltd., includes coloured Beclawat circular ash-trays, pendant lamps, Airvac ventilators, bell-pushes for the passengers to communicate with the driver, a daylight-sign direction indicator, two ruby lamps mounted high up in the rear panel to show the overall width of the vehicle and a rear numberplate fitted into one of the doors of the

AFURTHER step has been taken by South Wales coach and bus proprietors against the unauthorized use by municipalities of their buses as coaches for undertaking private-hire work. It will be recalled that early this year an injunction to restrain the Merthyr Council from using its buses as coaches for such work or purposes other than normal plying for hire was successfully applied for in the High Court by coach owners operating from the Merthyr district.

The Merthyr Council has, of course, observed the injunction, but other South :Wales local authorities operating buses have continued to use vehicles for carrying private parties. Amongst such councils was the Newport (Mon.) Borough Council. Bus and coach owners complained to the Newport Council at this misuse of Parliamentary authority to ply for hire with buses, but as no notice was taken the owners, through the solicitors who acted in the Merthyr case, served a notice upon the

rear locker. Incidentally, several small side lockers are also provided under the panels for general use.

Newport Council of the intention to apply to the High Court for a restraining injunction. This step has resulted in instructions being issued to the management of the Newport municipal service to discontinue to run buns except within the strict scope of the council's recognized statutory powers in the matter.

IN our issue dated May 22nd last we had an opportunity for referring to the special passenger chassis produced by Leyland Motors, Ltd., to meet Canadian conditions, and pictures have now come into our hands of a complete saloon coach of which this chassis serves as the basis. It may be recalled port for sanction to use buses or coaches for private-hire work. Upon inquiry, a representative of The Commercial Motor learns that bus owners are advised that the Ministry cannot grant such sanction without the council having first secured the necessary Parliamentary authority to use vehicles in the manner described.

With regard to an application being made to Parliament for sanction to private-hire work by a local authority, it is pointed out that for some years it has been the procedure of Parliamentary committees examining municipal Bills to strike out any clauses applying for sanction to ply for hire with motor coaches, and to keep the activities of municipalities strictly within the bounds of meeting the ordinary travelling requirements of the public in the areas concerned.

that the chassis has a wheelbase of unusual length, i.e., 19 ft. It has a sixcylindered engine rated at 100 h.p. An outstanding characteristic is its lowloading level, for which the special arrangement of the rear axle is largely responsible. The pot of the axle is placed on the left-hand side, quite close, to the spring pad, the transmission shaft line running parallel with the frame sider-sembers and, therefore, being on the left-hand side. Ily adopting this form of leyout, it has been possible to keep the floor height down to 24 ins, from the ground.

The engine, clutch and four-speed gearbox form a unit, and the rear axle has a ratio of 5ito I. The driver's position is on the left side, which meets the requirements of Canadian driving conditions.

The illustrations of the complete coach which we reproduce on this page clearly indicate the graceful and modern lines of the vehicle, and its finish is most distinctive, the lower panels being finished in cream and the upper structure in green, a _wide belt in vermilion separating the ..two. From the picture showing the right-hand side of the vehicle it will be observed that the filler for the petrol tank can be reached from outside the vehicle and a flap below it covers the petrol gauge. The roof has an enclosed section at the rear for accommodating luggage, and this is provided with aluminium rubbing strips and nickel-plated rails. The ladder which leads to the railed-in section on the roof is also nickel-plated, as is the rear bumper bar.

The arrangement of the seats in the interior follows conventional practice, that is to say, seats for two people are disposed on each side of a central gangway. All the seats are equipped with Marshall air-spring cushions, which are upholstered in dark green antique leather. The interior of the roof is also covered with a leather to match the general furnishings of the interior. Seats of a special type, which fold up against the sides of 'the main transverse seats, are fitted in the gangway. The passengers' entrance is at the front and is under the control of the driver, but there is an emergency door at the rear.

From the picture giving a three-quarter rear vie* of the vehicle it will be seen that the entire back of the body is glazed, and this ensures unrestricted vision. To comply with the special regulations which are in force in Ontario, navigation lights are fitted at the rear. All the side windows are arranged to be lowered between the body panels, and when raised to the height of the overlapping glass louvres, they ensure draughtlees ventilation in conjunction with electric fans fitted above the driver's position. The general appointment is neat and tasteful.

B40 MHIS is the time of the year when motor conch fares are usually in the melting pot, and there ie a tendency for reckless expedients to be employed so as to arrest the perfectly natural decline of traffic in consequence of the changing seasons. The first routes to suffer are those which are heavily trafficked.

At Liverpool a few days ago it was possible to make the journey to Blackpool, a distance of 96 miles, for 3s. return, but that quotation was exceptional. Operators who are engaged for the daily runs adhere to the standard rate of 5s, for the day return journey. That rate has been slightly eineumvented by such flimsy pretexts as running an afternoon coach at the cheap rate. At the time of writing there are several fares for the one journey, viz., 3s. 66., 4s. 6d. and 5s.

The Blackpool owners, on the other hand, are strongly resisting the temptation to allow the end-of-season fares to become ruinously competitive. Some adjustments have •just been made, and a concession of ed. to Is. 66. has been made on certain bookings. That reduction, however, is being uniformly ape plied to all. •

Whereas until recently the fare to Liverpool was 4s. single, 5s. ed. day rw turn, and es. Eld. extended return, the rate to-day is 4s. single, 5s. return and Cs. extended return. Passengers to Manchester provide the bulk of the outward traffic, and a generous inducement has been made to encourage outward bookings. Instead of being called upon to pay 4s. ed, single, 5s. day return and 6s. extended return, the respective ratda are 3s., 4s. and 5s. ed. The Bolton rate is down is, an the single journey and is. 6d. on the day return journey, and the Blackburn run 6d. and I.e. respectively. The rates now in operation are as follow:

As a result of the Blackpool illuminatione,season local motor coach owners have been provided with an excellent opportunity to book parties for evening runs to view the illuminations, which have attracted people from all parts of Lancashire. Even the railways have been running an enormous number of cheap excursions to the town.