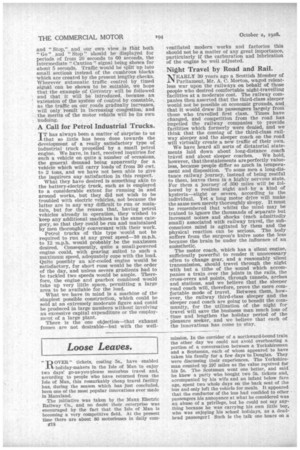 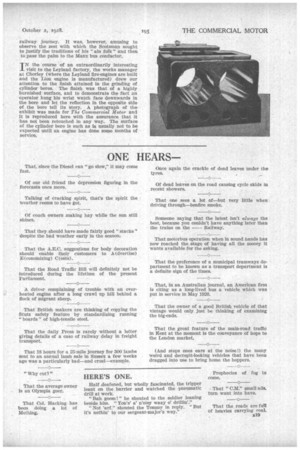 Page 2, 2nd October 1928 — Loose Leaves.
Close
Noticed an error?
If you've noticed an error in this article please click here to report it so we can fix it.

" ROVER ,,tickets, costing 5s., have enabled -1.11, holiday-makers in the Isle of Man to enjoy two days' go-as-you-please motorbus travel and, according to people who have returned from the Isle of Man, this remarkably cheap travel facility has, during the season which has just concluded, been one of the most popular innovations ever made In Manxland.

The initiative was taken by the Manx Electric Railway Co., and no doubt their enterprise was encouraged by the fact that the Isle of Man is becoming a very competitive field. At the present time there are about 80 motorbuses in daily com 218

mission. In the corridor of a northward-bound train the other day we could not avoid overhearing a portion of a conversation between a Yorkshireman and a Scotsman, each of whom appeared to have taken his family for a few days to Douglas. They were discussing their experiences. The Yorkshireman counted up 197 miles as the value reeeived for his 5s. The Scotsman went one better, and said lie knew a party who bought two 5s. tickets and, accompanied by his wife and an infant below fare age, spent two whole days on the back seat of the bus and only left the vehicle for meals. It appeared that the conductor of the bus had confided to other passengers his annoyance at what he considered was an abuse of a privilege, but he could not say anything because he was carrying his own little boy, who was enjoying his school holidays, as a deadhead passenger I Such is the talk one hears on a railway journey. It was, however, amusing to observe the zest with which the Scotsman sought to justify the traditions of his " ain folk" and then to pass the palm to the Manx bus conductor.

IN the course of an extraordinarily interesting visit to the Leyland factory, the works manager at Chorley (where the Leyland fire-engines are built and the Lion engine is manufactured) drew our attention to the finish attained in the grinding of cylinder bores. The finish was that of a highly burnished surface, and to demonstrate the fact an operator hung his wrist watch face downwards in the bore and let the reflection in the opposite side of the bore tell its story. A photograph of the exhibit was made for Me Commercial Motor and It is reproduced here with the assurance that it has not been retouched in any way. The surface of the cylinder bore is such as is usually not to be expected until an engine has done some months of service.