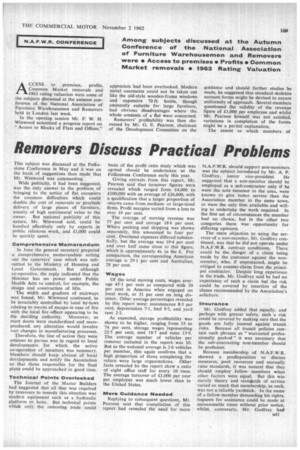 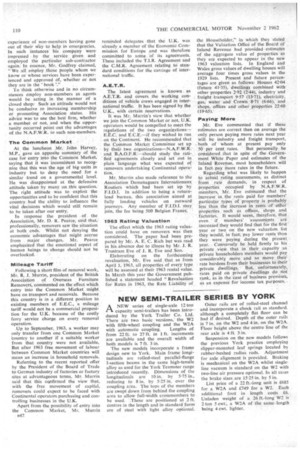 This subject was discussed at the Folkestone Conference in May and it was on the basis of suggestions then made that Mr. Winwood was commenting.

Wide publicity, it had been suggested, was the only answer to the problem of bringing to the notice of fiat occupiers the common difficulties which could double the cost of removals or preclude delivery of large pieces of furniture, usually of high sentimental value to the owner. But national publicity of this nature. Mr. Winwood said, could be handled effectively only by experts in public relations work, and £1,000 could be quickly spent.

Comprehensive Memorandum In June the general secretary prepared a comprehensive memorandum setting out the removers' case which was submitted to the Ministry of Housing and Local Government. But although co-operative, the reply indicated that the Minister has no power under Public Health Acts to control, for example, the design and construction of lifts.

The width and gradient of stairways was found, Mr. Winwood continued, to be invariably controlled by local by-laws relating to means of escape in case of fire with the local fire officer appearing to be the deciding authority. Moreover, as most doors were standardized and massproduced, any alteration would involve vast changes in manufacturing processes.

Therefore, the line of action they were anxious to pursue was in regard to local developments for which the active co-operation of members was necessary. Members should keep abreast of local developments and notify the Association so that those responsible for the final plans could be approached in good time.

Technical Points Overlooked The Journal of the Master Builders had suggested that all that was required by removers to remedy this situation was modern equipment such as a hydraulic platform or hoist. But technical points which only the removing trade could basis of the profit ratio study which was agreed should be undertaken -at the Folkestone Conference early this year.

Giving extracts from this report, Mr. Pearson said that turnover figures were revealed which ranged from £4,000 to £100,000 with an average of £26,000, with a qualification that a larger proportion of returns came from mediumor large-sized firms. Profit margins varied from a loss to over 19 per cent.

The average of moving revenue was 77 per cent and storage 18-6 per cent. Where packing and shipping was shown separately, this amounted to four per cent. Overhead expenses differed substantially, but the average was 19-4 per cent and over half came close to this figure, which is approximately 4s. in the £. For comparison, the corresponding American average is 29-1 per cent and Australian, 28 per cent.

Wages Of the total moving costs, wages average 45-1 per cent as compared with 50 per cent in America when engaged .on local work, or 31 per cent on long distance. Other average percentages revealed by this report were: maintenance 8.3 per cent, depreciation 7.1, fuel 9-5, and yard rent 2-2.

As expected, storage profitability was shown to be higher, ranging, from 33 to 74 per cent, storage wages representing 22-5 per cent, rent 18-7 and rates 13-9. The average number of vehicles per remover included in the report was 10. But as the national average is 2.6 vehicles per member, this again confirms that a high proportion of those completing the return were large organizations. Other facts revealed by the report show a ratio of eight office staff for every 10 vans. The average turnover of £1,000 per year per employee was much lower than in the United States.

More Guidance Needed Replying to subsequent questions, Mr. Pearson said that compilation of this report had revealed the need for more N.A.F.W.R. should support non-members was the subject introduced by Mr. A. P. Godfrey, junior vice-president. He suggested that a non-member should be employed as a sub-contractor only if he were the sole remover in the area, were known to give better service than the Association member in the same town, or were the only firm available and willing to undertake the work required. In the first set of circumstances the member had no choice, but in the other two categories there was opportunity for differing opinions.

The main objection to using the services of a non-member, Mr. Godfrey continued, was that he did not operate under N.A.F.W.R. contract conditions. There could be the danger of a claim being made by the customer against the nonmember, who, if unprotected, might be obliged to counter-claim from the principal contractor. Despite long experience in the trade, Mr. Godfrey said he had no experience of such a claim but the risk could be covered by insertion of the clause recommended by the Association's solicitors.

Insurance Mr. Godfrey added that equally, and perhaps with greater safety, such a risk could be covered by making sure that the goods are fully insured against transit risks. Because all transit policies contain such phrases as "warranted professionally packed" it was necessary that the sub-contracting non-member should be proficient.

Because membership of N.A.F.W.R. showed a predisposition to discuss measures, pool resources and mutually raise standards, it was natural that they should employ fellow members when other factors were equal. But this was merely theory and stanciards of service varied so much that membership, as such, was not a reliable yardstick. In the name of a fellow member demanding his rights, requests for assistance could be made at unreasonable times without prior notice, whilst, conversely, Mr. Godfrey had

experience of non-members having gone out of their laay to help in emergencies. In such instances his company were impressed by the . serviee given and employed the particular sub-contractor again: In essence, Mr. Godfrey claimed, "We all employ those people whom we know or whose services have been experienced and approved Of, whether or not they are in the book '."

To think otherwise and in no circumstances employ non-members as agents would he acting in the manner of a closed shop: Such an attitude would not be conducive to increasing membership or promoting Association status. His advice was to use the best firm, whether a member. or not, and when the opportunity occurred point out the advantages of the N.A.F.W.R. to such non-members.

At the luncheon Mr. John Harvey, M.P., gave an apposite summary of the case for entry into the Common Market, saying that it was inconsistent to recognize that this was the age of big units in industry but to deny the need for a similar trend on a governmental level. He was disappointed at thedefensive attitude taken by many on this question.. The right attitude was to exploit the opportunities and to be confident that this country had the ability to influence the vital decisions which would still remain to he taken after our entry.

In response the president of the Association, Mr. D. R. Pearce, said that,. professionally, removers saw the situation at both ends. Whilst not denying the economic advantages that might accrue from major changes, Mr. Pearce emphasized that the emotional aspect of human beings to change should not be overlooked.

Mileage Tariff Following a short film of removal work; Mr. R. J. Murrin, president of the British Association of Overseas Furniture Removeri, commented on the effect which entry into the Common Market might have on transport and removals. Because this country is in a different position to existing members of E.E.C., a mileage tariff would not be a commercial proposition for the U.K. because of the costly ferry service charge on every removal operation.

Referring to the recent reported offer by the President of the Board of Trade to German industry of factories or factory sites at advantageous terms. Mr. Murrin said that this ccinfirmcd the view that, with the free movement of capital, removers could expect to be faced with Continental operators purchasing and controlling businesses in the U.K.

Apart from the possibility of entry into the Common Market, Mr. Murrin B42 reminded delegates that the' U.K. was already a member of the Economic Commission for Europe and was therefore committed to some of its agreements. These included the T.I.R. Agreement and the C.M.R. Agreement relating to standard conditions for the carriage of international traffic.

The latest agreement is known as A.E.T.R. and covers the working conditions of vehicle crews engaged in international traffic. It has been signed by the U.K., with certain reservations.

It was Mr. Murrin's view that whether we join the Common Market or not, U.K. operators would be compelled to meet the regulations of the two organizations— EEC. and E.C.E.—if they wished to run on the Continent. He recommended that the Common Market Committee set up by their two organizations—N.A.F.W.R. and B.A.O.F.R.—should study the ratified agreements closely and set out in plain language what was expected of removers undertaking Continental operation.

Mr. Murrin also made reference to the Association Demenaguers Internationaux Routiers which had been set up by F.I.D.I. In addition to being a returnload bureau, this association aimed at fully loading vehicles on outward journeys_ Any member of F.I.D.I. may join, the fee being 500 Belgian Franes, • 1963 Rating Valuation The effect which the 1963 rating valuation could have on removers was then considered. The paper had been prepared by Mr. A. E. C. Rich but was read in his. absence due to illness by Mr. J. R. Trustram Eve of J. R. Eve and Son.

Elaborating on the forthcoming revaluation, Mr. Eve said that as fromApril 1, 1963, all properties of every type will be assessed at their 1963 rental value. In March this year the Government published a statement headed "Revaluation for Rates in 1963, the Rate Liability of the Householder," in which they stated that the Valuation Office of the Board of Inland -Revenue had provided estimates of the aggregate value of properties as they are expected to appear in the new 1963 valuation lists. In England and Wales gross values of dwelling houses will average four times gross values in the 1929 lists. Present and future percentages are given as follows: Houses 42-04 (future 41'35), dwellings combined with' other properties 2-92 (2-44), industry and freight transport 9-57 (13-71), -electricity. gas, water and Crown 8-71 (6-66), and shops, offices and other properties 22-60 (19-65):

Mr. Eve commented that if these estimates are correct then on average the only person paying more rates next year will be industry and freight transport, both. of whom at present pay only

56 per cent rates. But personally he considered that in spite of the Government White Paper and estimates of the Inland Revenue, most householders will in fact pay more rates in the future.

Regarding what was likely to happen to actual rating assessments, as distinct from rate demands, in respect of properties occupied by N.A.F.W.R. members. Mr. Eve estimated that the increase in the rents paid for members' particular types ot property is probably less than the increase in rents of other properties such as offices,. shops . and factories. It would seem, therefore, that even if members' -assessments . are increased they would find that for the first year or two on the new valuatirin list they would, in fact, pay lower rents than they were paying during the present year. Conversely he held firmly to his private view that in their capacity as private householders members would pay considerably more and so move their rate burdens from their businesses to their private dwellings.. But, unfortunately, rates paid on private dwellings do riot rank, as in the 'case of business premises, as an expense for income tax purposes.