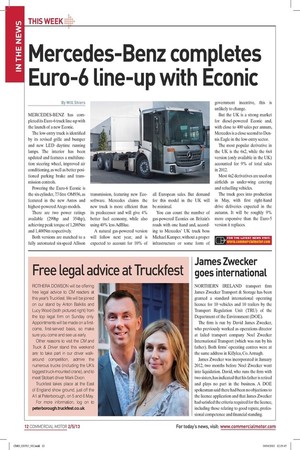 Page 8, 2nd May 2013 — Mercedes-Benz completes Euro-6 line-up with Econic By Will Shiers MERCEDES-BENZ
Close
Noticed an error?
If you've noticed an error in this article please click here to report it so we can fix it.

has completed its Euro-6 truck line-up with the launch of a new Econic.

The low-entry truck is identified by its revised grille and bumper and new LED daytime running lamps. The interior has been updated and features a multifunction steering wheel, improved air conditioning, as well as better positioned parking brake and transmission controls.

Powering the Euro-6 Econic is the six-cylinder, 7.7-litre 0M936, as featured in the new Antos and highest-powered Atego models.

Both versions are matched to a fully automated six-speed Allison transmission, featuring new Ecosoftware. Mercedes claims the new truck is more efficient than its predecessor and will give 4% better fuel economy, while also using 40% less AdBlue.

A natural gas-powered version will follow next year, and is expected to account for 10% of all European sales. But demand for this model in the UK will be minimal You can count the number of gas-powered Econics on Britain's roads with one hand and, according to Mercedes' UK truck boss Michael Kamper, without a proper infrastructure or some form of government incentive, this is unlikely to change.

But the UK is a strong market for diesel-powered Econic and, with close to 400 sales per annum, Mercedes is a close second to Dennis Eagle in the low-entry sector.

The most popular derivative in the UK is the 6x2, while the 6x4 version (only available in the UK) accounted for 9% of total sales in 2012.

Most 4x2 derivatives are used on airfields as under-wing catering and refuelling vehicles.

The truck goes into production in May, with first right-hand drive deliveries expected in the autumn. It will be roughly 9% more expensive than the Euro-5 version it replaces.