Bedford's Luton plant is nearly ready to begin production of 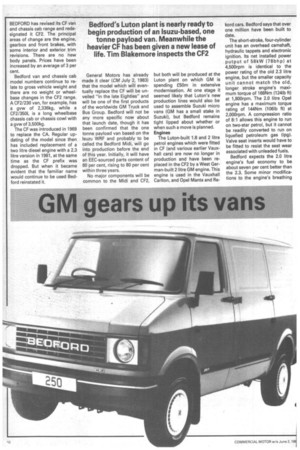 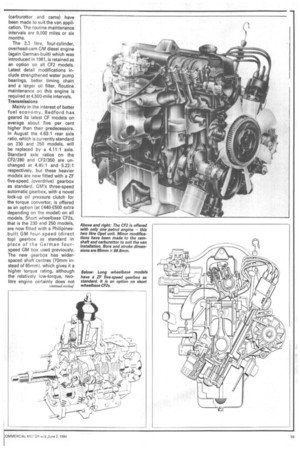 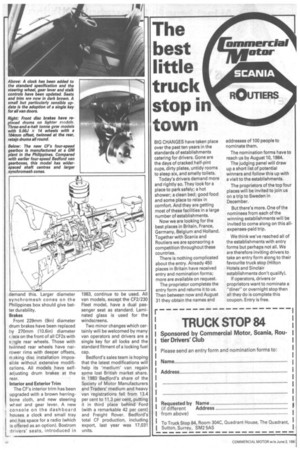 an lsuzu-based, one tonne payload van. Meanwhile the heavier CF has been given a new lease of life. Tim Blakemore inspects the CF2

BEDFORD has revised its CF van and chassis cab range and redesignated it CF2. The principal areas of change are the engine, gearbox and front brakes, with some interior and exterior trim revisions. There are no new body panels. Prices have been increased by an average of 3 per cent.

Bedford van and chassis cab model numbers continue to relate to gross vehicle weight and there are no weight or wheelbase changes in the CF2 range. A CF2/230 van, for example, has a gvw of 2,336kg, while a CF2/350L is a long wheelbase chassis cab or chassis cowl with a gvw of 3,500kg.

The CF was introduced in 1969 to replace the CA. Regular updating of the model since then has included replacement of a two litre diesel engine with a 2.3 litre version in 1981, at the same time as the CF prefix was dropped. But when it became evident that the familiar name would continue to be used Bedford reinstated it. General Motors has already made it clear (CM July 2, 1983) that the model which will eventually replace the CF will be unveiled "in the late Eighties" and will be one of the first products of the worldwide GM Truck and Bus Group. Bedford will not be any more specific now about that launch date, though it has been confirmed that the one tonne payload van based on the lsuzu WRF and probably to be called the Bedford Midi, will go into production before the end of this year. Initially, it will have an EEC-sourced parts content of 60 per cent, rising to 80 per cent within three years.

No major components will be common to the Midi and CF2, but both will be produced at the Luton plant on which GM is spending £50m in extensive modernisation. At one stage it seemed likely that Luton's new production lines would also be used to assemble Suzuki micro vans (GM has a small stake in Suzuki), but Bedford remains tight lipped about whether or when such a move is planned. Engines The Luton-built 1.8 and 2 litre petrol engines which were fitted in CF (and various earlier Vauxhall cars) are now no longer in production and have been replaced in the CF2 by a West German-built 2 litre GM engine. This engine is used in the Vauxhall Carlton, and Opel Manta and Re kord cars. Bedford says that over one million have been built to date.

The short-stroke, four-cylinder unit has an overhead camshaft, hydraulic tappets and electronic ignition. Its net installed power putput of 58kW (7 8bhp) at 4,500rpm is identical to the power rating of the old 2.3 litre engine, but the smaller capacity unit cannot match the old, longer stroke engine's maximum torque of 168Nm (124Ib ft) at 1,800rpm. The 2.0 litre Opel engine has a maximum torque rating of 144Nm (106Ib ft) at 2,000rpm. A compression ratio of 8:1 allows this engine to run on two-star petrol, but it cannot be readily converted to run on liquefied petroleum gas (lpg). Valve seat inserts would have to be fitted to resist the seat wear associated with unleaded fuels.

Bedford expects the 2.0 litre engine's fuel economy to be about seven per cent better than the 2.3. Some minor modifications to the engine's breathing (carburettor and cams) have been made to suit the van application. The routine maintenance intervals are 9,000 miles or six months.

The 2.3 litre, four-cylinder, overhead-cam GM diesel engine (again German-built) which was introduced in 1981, is retained as an option on all CF2 models. Latest detail modifications include strengthened water pump bearings, better timing chain and a larger oil filter. Routine maintenance on this engine is required at 4,500-mile intervals. Transmissions Mainly in the interest of better fuel economy, Bedford has geared its latest CF models on average about five per cent higher than their predecessors. In August the 4.63:1 rear axle ratio, which is currently standard on 230 and 250 models, will be replaced by a 4.11:1 axle. Standard axle ratios on the CF2/280 and CF2/350 are unchanged at 4.45:1 and 5.22:1 respectively, but these heavier models are now fitted with a ZF five-speed (overdrive) gearbox as standard. GM's three-speed automatic gearbox, with a novel lock-up oil pressure clutch for the torque convertor, is offered as an option (at £440-£500 extra depending on the model) on all models. Short wheelbase CF2s, that is the 230 and 250 models, are now fitted with a Philipinesbuilt GM four-speed (direct top) gearbox as standard in place of the German fourspeed GM box used previously. The new gearbox has widerspaced shaft centres (70mm instead of 65mrn), which gives it a higher torque rating, although the relatively low-torque, twolitre engine certainly does not demand this. Larger diameter synchromesh cones on the Philippines box should give better durability.

Brakes Front 229mm (9in) diameter drum brakes have been replaced by 270mm (10.6in) diameter tiscs on the front of all CF2s with s-rigle rear wheels. Those with twinned rear wheels have narrower rims with deeper offsets, making disc installation impossible without extensive modifications. All models have selfadjusting drum brakes at the rear.

Interior and Exterior Trim The CF's interior trim has been upgraded with a brown herringbone cloth, and new steering wheel and gear lever. A new console on the dashboard houses a clock and small tray

1 and has space for a radio (which is offered as an option). Bostrom L drivers' seats, introduced in

1983, continue to be used. A I van models, except the CF2/230 Fleet model, have a dual passenger seat as standard. Laminated glass is used for the windscreens.

Two minor changes which certainly will be welcomed by many van operators and drivers are a single key for all locks and the standard fitment of a locking fuel cap.

Bedford's sales team is hoping that the latest modifications will help its 'medium' van regain some lost British market share. In 1983 Bedford's share of the Society of Motor Manufacturers and Traders' medium and heavy van registrations fell from 13.4 per cent to 11.3 per cent, putting it in third place behind Ford (with a remarkable 42 per cent) and Freight Rover. Bedford's total CF production, including export, last year was 17,031 units.