'Dockers have stabbed us in the back' 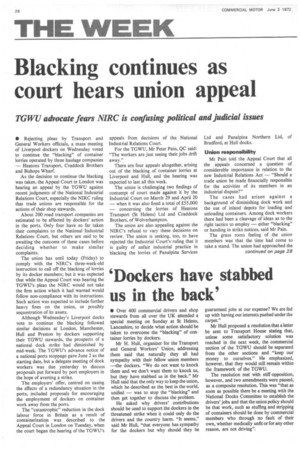 Page 28, 2nd June 1972 — 'Dockers have stabbed us in the back'
Close
Noticed an error?
If you've noticed an error in this article please click here to report it so we can fix it.
Keywords : Stevedore, Transport And General Workers' Union, Dockers

• Over 400 commercial drivers and shop stewards from all over the UK attended a special meeting on Sunday at St Helens, Lancashire, to decide what action should be taken to overcome the "blacking" of container lorries by dockers.

Mr H. Hull, organizer for the Transport and General Workers' Union, addressing them said that naturally they all had sympathy with their fellow union members —.the dockers. "We do not want to knock them and we don't want them to knock us, but they have stabbed us in the back." Mr Hull said that the only way to keep the union, which he described as the best in the world, unified — was to stop the "blacking" and then get together to discuss the problem.

He asked why drivers' contributions should be used to support the dockers in the threatened strike when it could only do the drivers and the country harm. "It seems," said Mr Hull, "that everyone has sympathy for the dockers but why should they be guaranteed jobs at our expense? We are fed up with having our interests pushed under the carpet."

Mr Hull proposed a resolution that a letter be sent to Transport House stating that, unless some satisfactory solution was reached in the next week, the commercial section of the TGWU should be separated from the other sections and "keep our money to ourselves." He emphasized, however, that they would still remain within the framework of the TGWU.

The resolution met with stiff opposition, however, and two amendments were passed, as a composite resolution. This was "that as soon as possible there be a meeting with the National Docks Committee to establish the drivers' jobs and that the union policy should be that work, such as stuffing and stripping of containers should be done by commercial members who through no fault of their own, whether medically unfit or for any other reason, are not driving".