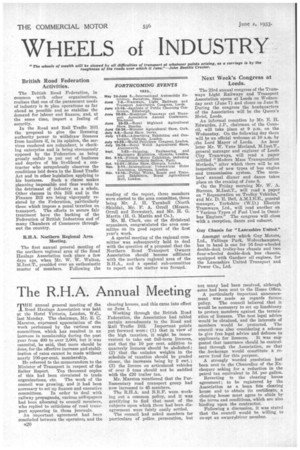 Page 38, 2nd June 1933 — The R.H.A. Annual Meeting
Close
Noticed an error?
If you've noticed an error in this article please click here to report it so we can fix it.
Keywords : Road Haulage Association, Salter Report, Tax

THE annual general Meeting of the Road Haulage Association was held at the Hotel Victoria, London, W.C., last Monday. The chairman, Mr. E. C. Marston, expressed appreciation of the work performed by the various area committees, which has resulted in an increase in membership during the past year from 400 to over 2,000, but it was essential, he said, that more should be done, for the effective increase and stabilization of rates cannot be made without nearly 100-per-cent. membership.

He referred to the memorandum to the Minister of Transport in respect of the Salter Report. Ten thousand copies of this had been circulated to trade organizations, etc. The work of the council was growing, and it had been necessary to set up finance and executive

committees. In order to deal with railway propaganda, various nialirspapers had been allocated to council members, who replied to criticisms of road transport appearing in those journals, An important agreement had been concluded between the operators and the a20 clearing houses, and this came into effect on June 1.

Working through the British Road Federation, the Association had tabled certain amendments to the Road and Rail Traffic Bill. Important points put forward were: (1) that in view of the high taxation, it might be inconvenient to take out full-term licences, and that the 10 per cent, addition to quarterly licences should be abolished ; (2) that the unladen weights in the schedule of taxation should be graded closer, the increases being by 5 cwt.; (3) the licence on articulated vehicles of over 5 tons should not be saddled with the £20 trailer tax.

The R.H.A. and B.R.F. were• working out a common policy, and it was gratifying to find that most of the subjects upon which there had been disagreement were fairly easily settled.

The council had asked members for particulars of police Persecution, but not many had been received, although some had been sent to the Home Office. A particularly important announcement was made as regards future _ policy. The council believed that it would be necessary to sat up 'Machinery to protect members against the termination of licences. The best legal advice would be obtained, and the interests of members would be protected. The council was also considering a scheme to give free legal advice and defence to

applicants for licences. It was suggested that insurance should be centralized through the Association, so that the -brokerage would constitute a reserve fund for this purpose.

A strongly worded ;resolution had been sent to the Chancellor of the Exchequer asking for a reduction in the petrol tax equivalent to 3d. per gallon. Reverting to the clearing house agreement ; to be registered by the Association as a bona fide clearing house and to obtain its certificate, a clearing house must agree to abide by the terms and conditions, which are also binding upon the contractor. Following a discussion, it was stated that the council would be willing to co-opt an ownerliriver member.