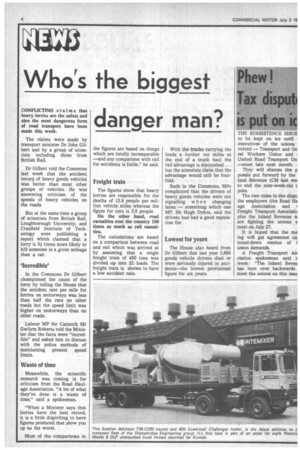 CONFLICTING claims that heavy lorries are the safest and also the most dangerous form of road transport have been made this week.

The claims were made by transport minister Dr John Gilbert and by a group of scientists including those from British Rail.

Dr Gilbert told the Commons last week that the accident record of heavy goods vehicles was better than most other groups of vehicles. He was answering criticism of the speeds of heavy vehicles on the roads.

But at the same time a group of scientists from British Rail, Loughborough University, and Cranfield Institute of Technology were publishing a report which claimed that a lorry is 31 times more likely to kill someone in a given mileage than a car.

In the Commons Dr Gilbert championed the cause of the lorry by telling the House that the accident rate per mile for lorries on motorways was less than half the rate on other roads but the speed limit was higher on motorways than on other roads.

Labour MP for Cannock Mr Gwilym Roberts told the Minister that the facts were "incredible" and asked him to discuss with the police methods of maintaining present speed limits.

Meanwhile, the scientific research was coming in for criticism from the Road Haulage Association. "A lot of what they've done is a waste of time," said a spokesman.

"When a Minister says that lorries have the best record, it is a little dispiriting to have figures produced that show you up as the worst.

Most of the comparisons in the figures are based on things which are totally incomparable —and any comparison with rail for accidents is futile," he said.

The figures show that heavy lorries are responsible for the deaths of 13.8 people per million vehicle miles whereas the figure for cars is 3.8 people.

On the other hand, road casualties cost the country 150 times as much as rail casualties.

The calculations are based on a comparison between road and rail which was arrived at by assuming that a single freight train of 450 tons was divided up into 22 loads. The freight train is shown to have a low accident rate. With the trucks carrying the loads a further ten miles at the end of a trunk haul the rail advantage is diminished ... but the scientists claim that the advantage would still be fourfold.

Back in the Commons, MPs complained that the drivers of heavy goods vehicles were not signalling when changing lanes — something which one MP, Mr Hugh Dykes, said the drivers had had a good reputation for.