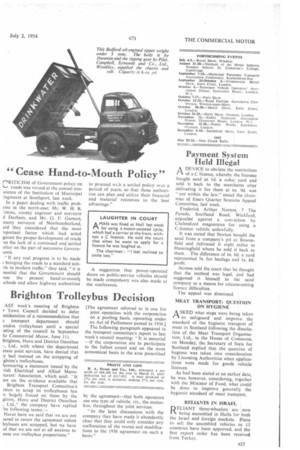 Page 51, 2nd July 1954 — Brighton Troll eybus Decision
Close
Noticed an error?
If you've noticed an error in this article please click here to report it so we can fix it.
Keywords : Brighton And Hove, Monarch's Way, Brighton, Trolleybus, Hove, Bus

AST week's meeting of Brighton Town Council decided to defer nsideration of a recommendation that c transport department should andon trolleybuses until a special !eting of the council in September he Commercial Motor, June 11).

Brighton, Hove and District Omnibus Ltd., with whom the department crate joint services, have denied that :y had insisted on the scrapping of ghton's trolleybuses.

knswering a statement issued by the tish Electrical and Allied Manuturers' Association, which said: It ms on the evidence available that Brighton Transport Committee's ision to scrap its trolleybuses has n largely forced on them by the ghton, Hove and District Omnibus , Ltd.," the company have replied he following terms:— Never have we said that we arc not 5ared to renew the agreement unless leybuses are scrapped, but we have xl that we are not at all anxious to ease our trolleybus proportions."

(The agreement referred to is one for joint operation with the corporation on a pooling basis, operating under an Act of Parliament passed in 1938.] The following paragraph appeared in the transport committee's report to last week's council meeting: "It is essential —if the corporation are to participate to the fullest extent and on the most economical basis in the area prescribed by the agreement—that both operators use one type of vehicle, viz., the motorbus, throughout the joint services.

"In the later discussions with the company they have made it abundantly clear that they could only consider any reallocation of the routes and modifications to the 1938 agreement on such a basis."