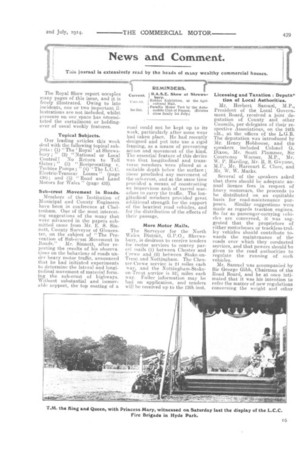 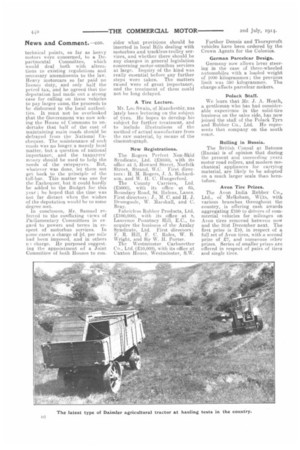 Page 15, 2nd July 1914 — News and Comment.
Close
Noticed an error?
If you've noticed an error in this article please click here to report it so we can fix it.
Keywords : Tire, Cooper Tire & Rubber Company, Tires

This journal is extensively read by the heads of inlny wealthy commercial houses.

The Royal Show report occupies many pages of this issue, and it is freely illustrated. Owing to late incidents, oue or two important illustrations are not included, whilst pressure on our space has necessitated the curtailment or holdingover of usual weekly features.

Members of the Institution of Municipal and County Engineers have been in conference at Cheltenham. One of the most interesting suggestions of the many that were advanced in the papers submitted came from Mr. E. S. Sinnott, County Surveyor of Gloucester, on the subject of "The Prevention of Sub-crust Movement in

Roads." Mr. Sinnott, after reporting the results of his observa• Lions on the behaviour of roads under heavy motor traffic, announced that he had initiated experiments to determine the lateral and longitudinal movement of material forming the sub-crust of highways. Without substantial and inunovable support, the top coating of a

road could not be kept up to its work, particularly after some wear had taken place. He had recently designed and put into use a rigid framing, as a means of preventing action and movement of the kind. The essential feature of this device was that longitudinal and transverse members were placed at a suitable depth below the surface ; these precluded any movement of the sub-crust, and at the same time provided a means of constructing an impervious arch of tarred macadam to carry the traffic. The longitudinal members provided great additional strength for the support of the heaviest road vehicles, and for the distribution of the effects of their passage.

The Surveyor for the North Wales District, G.P.O., Shrewsbury, is desirous to receive tenders for motor services to convey parcel mails (1) between Chester and Crewe and (2) between Stoke.onTrent and Nottingham. The Chester-Crewe service is 2-1 miles each way, and the Nottingham-Stokeon-Yrent service is tiV, miles each way. Fuller information may be had on application, and tenders will be received up to the 13th inst. Licensing and Taxation : Deputam tion of Local Authorities.

Several of the speakers asked that there should be adequate annual licence fees in respect of heavy motorcars, the proceeds to ho distributed on an equitable basis for road-maintenance purposes_ Similar suggestions were made as regards traction engines. So far as passenger-carrying chides are concerned, it was suggested that the proprietors of either motorbuses or trackless-trolley vehicles should contribute towards the maintenance of the roads over which they conducted services, and that powers should be given to the road authorities to regulate the running of such vehicles.

Mr. Samuel was accompanied by Sir George Gibb, Chairman of the Road Board, and he at once intimated that it was his intention to refer the matter of new regulations concerning the weight and other technical points, so far as heavy motors were concerned, to a Departmental Committee, which would deal both with alterations to existing regulations and necessary amendments to the law. Heavy motorcars 80 far paid no licence duty, and only half the petrol tax, and he agreed that the deputation had made out a strong case for calling on these vehicles to pay larger sums, the proceeds to be disbursed to the local authorities. It must not be overlooked that the Government was now asking the House of Commons to undertake that half of the cost of maintaining main roads should be defrayed from the National Exchequer. The maintenance of such roads was no longer a merely local matter, but a question of national importance, and the taxpayers' money should be used to help the needs of the ratepayers. But, whatever was done, let them not get back to the principle of the This matter was one for the Exchequer, but it could hardly be added to the Budget for this year ; he hoped that the time was not, far distant when the wishes of the deputation would be to some degree met.

in conclusion, Mr. Samuel referred to the conflicting views of Parliamentary Committees in regard to powers and terms in respect of motorbus services. In some cases a charge of id. per mile bad been imposed, and in others n charge. He purposed suggesting the appointment of a Joint Committee of both Houses to con

sider what provisions should be inserted in local Bills dealing with motorbus and trackless-trolley services, and whether there should be any changes in general legislation concerning motor-omnibus services at large. Inquiry of the kind was really essential before any further steps were taken. The matters raised were of great importance, and the treatment of them could not be long delayed.

Mr. Lac, Swain, of Manchester, has lately been lecturing on the subject of tires. He hopes to develop his subject for further treatment, and to include illustrations of the method of actual manufacture from the raw material, by means of the cinematograph.

The Westminster Carburetter Co., Ltd. (X10,000), with its office at Caxton House. Westminster, S.W. Further Dennis and Thornycroft vehicles have been ordered by the Crown Agents for the Colonies.

Germany now allows lever steering in the case of three-wheeled automobiles with a loaded weight of 1000 kilogrammes ; the previous limit was 350 kilogrammes. The change affects parcelcar makers.

We learn that Mr. J. A. Heath, a gentleman who has had consider-. able experience in the solid-tire business on the sales side, has now joined the staff of the Polack Tyr9 and Rubber Co., Ltd. He represents that company on the south coast.

The British Consul at Batoum (Russia) is of opinion that during the present and succeeding yeara motor road rollers, and modern mechanical appliances for carrying material, are likely to be adopted on a much larger scale than heretofore.

The Avon India Rubber Co., Ltd., of Melksham, Wilts, with various branches throughout the country, is offering cash awards aggregating 2100 to drivers of commercial vehicles for mileages on Avon tires removed between now and the 31st December next. Tim first prize is 210, in respect of a full set of Avon tires, with a second prize of 27, and numerous other prizes. Series of smaller prizes are offered in respect of pairs of tires and single tires.