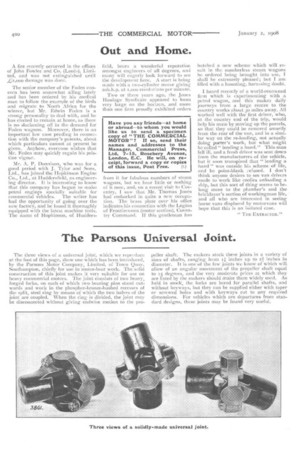 Page 12, 2nd January 1908 — Out and Hotne1
Close
Noticed an error?
If you've noticed an error in this article please click here to report it so we can fix it.
Keywords : Sandbach, Edwin Foden, Sons & Co., Steam Wagon, Erf

A fire recently occurred in the offices of John Fowler and Co. (Leeds), Limited, and was not extinguished until £2,000 damage was done.

The senior member of the Foden concern has been. somewhat ailing lately and has been ordered by his medical man to follow the example of the birds and migrate to North Africa for the winter, but Mr. Edwin Foden is a strong personality to deal with, and he has elected to remain at home, as there is no slackening off in the demand for Foden wagons. Moreover, there is an important law case pending in connection with the company's patents, about which particulars cannot at present be given. Anyhow, everyone wishes that Foden may quickly regain his pristine vigour.

Mr. A. P. Donnison, who was for a good period with J. Tylor and Sons, Ltd., has joined the Ilopkinson Engine Co., Ltd., at Huddersfield, as engineering director. It is interesting to know that this company has begun to make petrol enginp specially suitable for

commercial vehicles. The writer has had the opportunity of going over the new factory, and he found it thoroughly equipped with the latest machine tools. The name of Hopkinson, of Hudders field, bears a wonderful reputation amongst engineers of all degrees, and many will eagerly look forward to see the development here. A start is being made with a two-cylinder motor giving sob.h.p. at r,000 revolutions per minute..

Two or three years ago, the Jones Haulage Syndicate appeared to loom very large on the horizon, and more than one firm proudly exhibited orders fiorn it for fabulous numbers of steam wagons, but we hear little or nothing of it now, and, on a recent visit to Coventry, I saw that Mr. Thomas Jones had embarked in quite a new occupation. The brass plate over his office indicates his connection with the Legion of Frontiersmen .(motor section), Coventry Command, If this gentleman has hatched a new scheme which will re suit in the numberless steam wagons he ordered being brought into use, shall he extremely pleased; hut I am filled with a haunting, harassing doubt.

I heard recently of a world-renowned firm which is experimenting With a petrol wagon,. and this makes daily journeys from a large centre to the country works about 3o miles away. All worked well with the first driver, who, at the country end of the trip, would help his mate by moving up the parcels, so that they could be removed smartly from the rear of the van, and in a similar way on the re-loading, not actually doing porter's work, but what might be called " lending a hand." This man fell ill, and a fresh driver was sent down from the manufacturers of the vehicle, but it soon transpired that " lending a hand" was outside his scheme of life, and he point-blank 1-efused. I don't think anyone desires to see van drivers made to work like coolies unloading a ship, but this sort of thing seems to belong more to the plumber's and the bricklayer's section of workingman life, • and all who are interested in seeing horse vans displaced by motorvans will hope that this is an isolated case.