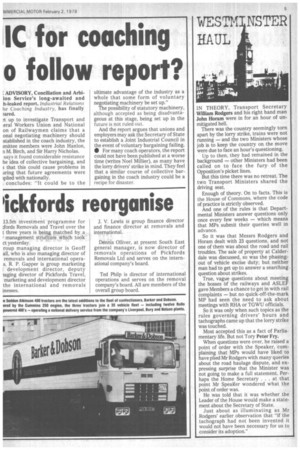 IN THEORY, Transport Secretary William Rodgers and his right hand man John Horam were in for an hour of unmitigated hell. There was the country seemingly torn apart by the lorry strike, trains were not running — and the two Ministers whose job is to keep the country on the move were due to face an hour's questioning.

Up to then, they had remained in the background — other Ministers had been called on to face the fury of the Opposition's picket lines.

But this time there was no retreat. The two Transport Ministers shared the driving seat.

Enough of theory. On to facts. This is the House of Commons, where the code of practice is strictly observed.

And one of the rules is that Departmental Ministers answer questions only once every few weeks — which means that MPs submit their queries well in advance.

So it was that Messrs Rodgers and Horam dealt with 23 questions, and not one of them was about the road and rail troubles. The sale of property at Calderdale was discussed, so was the phasingout of vehicle excise duty; but neither man had to get up to answer a searching. question about strikes.

True, vague questions about meeting the bosses bf the railways and ASLEF gave Members a chance to get in with rail complaints — but no quick-off-the-mark MP had seen the need to ask about meetings with RHA or TGWU officials.

So it was only when such topics as the rules governing drivers' hours and tachographs came up that the lorry strike was touched.

Most accepted this as a fact of Parliamentary life. But not Tory Peter Fry.

When questions were over, he raised a point of order with the Speaker, complaining that MPs would have liked to have plied Mr Rodgers with many queries about the road haulage dispute, and expressing surprise that the Minister was not going to make a full statement. Perhaps the Home Secretary . . . at that point Mr Speaker wondered what the point of order was.

He was told that it was whether the Leader of the House would make a statement about the Secretary of State.

Just about as illuminating as Mr Rodgers' earlier observation that "if the tachograph had not been invented it would not have been necessary for us to consider its adoption."