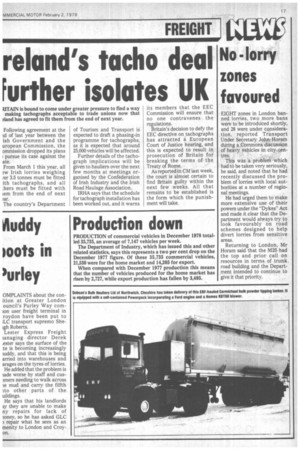 Page 19, 2nd February 1979 — No -lorry zones favoured
Close
Noticed an error?
If you've noticed an error in this article please click here to report it so we can fix it.
Keywords : Transport In Kent, Transport In Buckinghamshire, John Horam, Lorry, Horam, M25 Motorway, Politics

EIGHT zones in London banned lorries, two more bans were to be introduced shortly, and 28 were under consideration, reported Transport Under Secretary John Horam during a Commons discussion of heavy vehicles in city centres.

This was a problem which had to be taken very seriously, he said, and noted that he had recently discussed the problem of lorries with local authorities at a number of regional meetings.

He had urged them to make more extensive use of their powers under the "Dykes" Act and made it clear that the Department would always try to look favourably on road schemes designed to help divert lorries from sensitive areas.

Returning to London, Mr Horam said that the M25 had the top and prior call on resources in terms of trunk. road building and the Departpent intended to continue to give it that priority.