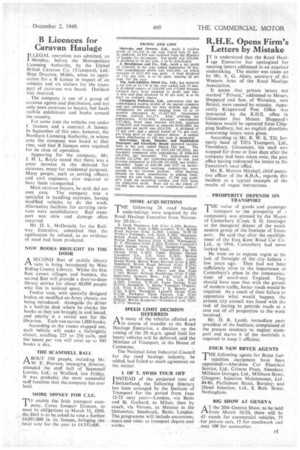 Page 39, 2nd December 1949 — 11,11.E. Opens Firm's • Letters by Mistake
Close
Noticed an error?
If you've noticed an error in this article please click here to report it so we can fix it.
Keywords : G, Millburn, New Jersey

I T is understood that the Road Haul

age Executive has apologized for opening letters addressed to an acquired undertaking. The matter was taken up by Mr. A. G. Akers, secretary of th.: Western Area of the Road Haulage Association. It seems that private letters not marked "Private," addressed to Messrs. Sheppard and Son, of Warmley, near Bristol. were opened by mistake. Apparently Kingswood Post Office was instructed by the R.H.E. office in Gloucester that Messrs. Sheppard's business would be operated from Chipping Sodbury, but no explicit directions concerning letters were given. According to Mr. R. W. E. Till, formerly head of Till's Transport, Ltd., Thornbury, Gloucester, his mail was stopped for three or four days after the company had been taken over, the post office having redirected his letters to the Executive's local office. Mr. R. Morton Mitchell, chief executive officer of the R.H.A., regards this incident as a typical example of the results of vague instructions.

THE value of goods and passenger transport to the prosperity of community was stressed by the Mayor of Canterbury (Coun. S. H. Jennings) at the inaugural dinner of the southeastern group of the Institute of Transport. He said that after the establish ment of the East Kent Road Car Co.. Ltd., in 1916. Canterbury had neve' looked back.

He went on to express regret at the lack of foresight of the city fathers 1 few years ago. They had not been sufficiently alive to the importance of Canterbury's place in the communications of south-east England. They should have seen that with the growth of modern traffic, better roads would be required. As a result of their failure to appreciate what would happen. the present city council was faced with the task of having to provide roads at a cost out of all proportion to the work involved.

Mr. D. R. Lamb, immediate pastpresident of the Institute, complained Of the present tendency to neglect transport and starve it of the materials it required to keep it efficient.