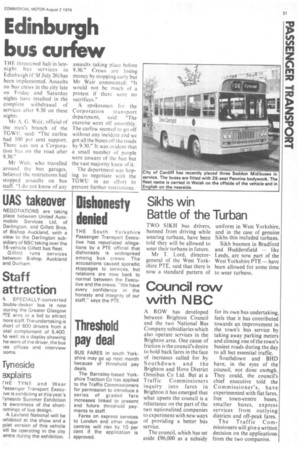 Page 23, 2nd August 1974 — Council row with NBC
Close
Noticed an error?
If you've noticed an error in this article please click here to report it so we can fix it.

A ROW has developed between Brighton Council and the two National Bus Company subsidiaries which also operate services in the Brighton area. One cause of friction is the council's desire to hold back fares in the face of increases called for by Southdown and the Brighton and Hove District Omnibus Co Ltd. But at a Traffic Commissioners inquiry into fares in Brighton it has emerged that what upsets the council is a reluctance on the part of the two nationalized companies to experiment with new ways of providing a better bus service.

The council, which has set aside 06,000 as a subsidy for its own bus undertaking, feels that it has contributed towards an improvement in the town's bus service by taking away parking meters and closing one of the town's busiest roads during the day to all but essential traffic.

Southdown and BHD have, in the eyes of the council, not done enough. They could, the council's chief executive told the Commissioner's, have experimented with flat fares, free town-centre buses, smaller buses, express services from outlying districts and off-peak fares.

The Traffic Commissioners will give a written decision on the applications from the two companies.