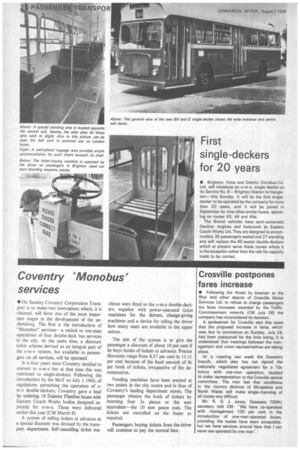 Page 22, 2nd August 1968 — First single-deckers for 20 years
Close
Noticed an error?
If you've noticed an error in this article please click here to report it so we can fix it.

• Brighton, Hove and District Omnibus Co. Ltd. will introduce an o-m-o. single decker on its Service No. 8—Brighton Station to Hangleton—this Sunday. It will be the first singledecker to be operated by the company for more than 20 years, and it will be joined in September by nine other similar buses. operating on routes 43. 44 and 44a.

The Bristol vehicles have semi-automatic Gardner engines and bodywork by Eastern Coach Works Ltd. They are designed to accommodate 35 passengers seated and 27 standing and will replace the 60-seater double-deckers which at present serve these routes where it is the exception rather than the rule for capacity loads to be carried.