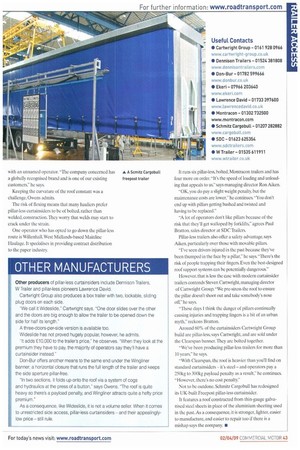 Page 43, 2nd April 2009 — OTHER MANUFACTURERS
Close
Noticed an error?
If you've noticed an error in this article please click here to report it so we can fix it.
Keywords : Trailer, Recreational Vehicle, Pillar

Cartwright Group also produces a box trailer with two, lockable, sliding plug doors on each side.

We call it Wideslide," Cartwright says. One door slides over the other and the doors are big enough to allow the trailer to be opened down the side for half its length."

A three-doors-per-side version is available too.

Wideslide has not proved hugely popular, however, he admits.

"It adds £1 0,000 to the trailer's price," he observes. "When they look at the premium they have to pay, the majority of operators say they'll have a curtainsider instead."

Don-Bur offers another means to the same end under the Wingliner banner; a horizontal closure that runs the full length of the trailer and keeps the side aperture pillar-free.

"In two sections, it folds up onto the roof via a system of cogs and hydraulics at the press of a button, says Owens. The roof is quite heavy so there's a payload penalty, and Wingfiner attracts quite a hefty price premium."

As a consequence, like Wideslide, it is not a volume seller. When it comes to unrestricted side access, pillar-less curtainsiders and their appealinglylow price still rule.