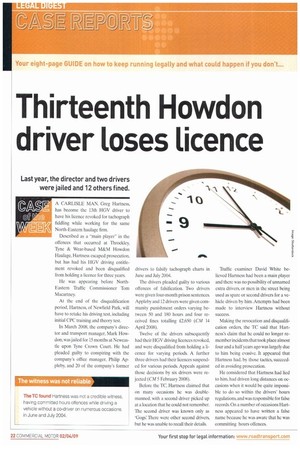 Last year, the director and two drivers were jailed and 12 others fined.

A CARLISLE MAN. Greg Hartness, has become the 13th HGV driver to have his licence revoked for tachograph fiddling while working for the same North-Eastern haulage firm.

Described as a -main playerin the offences that occurred at Throckley. Tyne & Wear-based M&M Howdon Haulage, Hartness escaped prosecution, but has had his HGV driving entitlement revoked and been disqualified from holding a licence for three years.

He was appearing before NorthEastern Traffic Commissioner Tom Macartney.

At the end of the disqualification period, Hartness, of Newfield Park, will have to retake his driving test, including initial CPC training and theory test.

In March 2008, the company's director and transport manager, Mark Howdon, was jailed for 15 months at Newcastle upon Tyne Crown Court. He had pleaded guilty to conspiring with the company's office manager, Philip Appleby, and 20 of the company's former drivers to falsify tachograph charts in June and July 2004.

The drivers pleaded guilty to various offences of falsification. Two drivers were given four-month prison sentences. Appleby and 12 drivers were given community punishment orders varying between 50 and 180 hours and four received fines totalling £2,650 (CM 14 April 2008).

TWelve of the drivers subsequently had their HGV driving licences revoked, and were disqualified from holding a licence for varying periods. A further three drivers had their licences suspended for various periods. Appeals against those decisions by six drivers were rejected (CM 5 February 2008).

Before the IC, Hartness claimed that on many occasions he was doublemanned, with a second driver picked up at a location that he could not remember. The second driver was known only as `Gogs: There were other second drivers, but he was unable to recall their details. Traffic examiner David White believed Hartness had been a main player and there was no possibility of unnamed extra drivers, or men in the street being used as spare or second drivers for a vehicle driven by him. Attempts had been made to interview Hartness without success.

Making the revocation and disqualification orders, the TC said that Hartness's claim that he could no longer remember incidents that took place almost four and a half years ago was largely due to him being evasive. It appeared that Hartness had, by those tactics, succeeded in avoiding prosecution.

He considered that Hartness had lied to him, had driven long distances on occasions when it would be quite impossible to do so within the drivers' hours regulations, and was responsible for false records. On a number of occasions Hartness appeared to have written a false name because he was aware that he was committing hours offences.