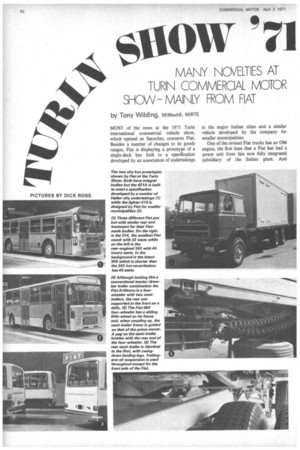 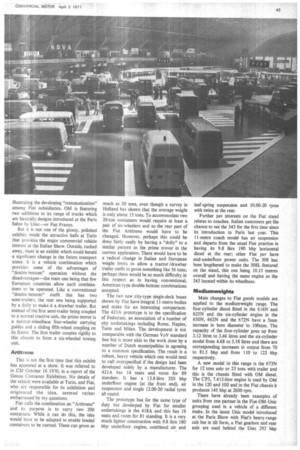 MOST of the news at the 1971 Turin in the major Italian cities and a similar international commercial vehicle show, vehicle developed by the company for which opened on Saturday, concerns Fiat. smaller municipalities.

Besides a number of changes to its goods One of the revised Fiat trucks has an OM ranges, Fiat is displaying a prototype of a engine, the first time that a Fiat has had a single-deck bus built to a specification power unit from this now fully integrated developed by an association of undertakings subsidiary of the Italian giant. And illustrating the developing "commonization" among Fiat subsidiaries, OM is featuring two additions to its range of trucks which are basically designs introduced at the Paris Salon by Unic—or Fiat France.

But it is not one of the glossy, polished exhibits inside the attractive halls at Turin that provides the major commercial vehicle interest at the Italian Show. Outside, tucked away, there is an exhibit which could herald a significant change in the future transport scene. It is a vehicle combination which provides some of the advantages of "double bottom" operation without the disadvantages—the main one being that few European countries allow such combinations to be operated. Like a conventional "double-bottom" outfit this has two semi-trailers, the rear one being supported by a dolly to make it a drawbar trailer. But instead of the first semi-trailer being coupled to a normal tractive unit, the prime mover is a normal-wheelbase four-wheeler carrying guides and a sliding fifth-wheel coupling on its frame. The first trailer couples rigidly to this chassis to form a six-wheeled towing unit.

Artitreno This is not the first time that this exhibit has appeared at a show. It was referred to in CM October 16 1970, in a report of the Genoa Container Exhibition. No details of the vehicle were available at Turin, and Fiat, who are responsible for its exhibition and originated the idea, seemed rather embarrassed by my questions.

Fiat calls the combination an "Artitreno" and its purpose is to carry two 20ft containers. While it can do this, the idea would have to be adapted to enable loadql containers to be carried. These can gross as much as 20 tons, even though a survey in Holland has shown that the average weight is only about 15 tons. To accommodate two 20-ton containers would require at least a pair of six-wheelers and so the rear part of the Fiat Artitreno would have to be changed. However, perhaps this could be done fairly easily by having a "dolly" to a similar pattern as the prime mover in the current application. There would have to be a radical change in Italian and European weight limits to allow a tractor /drawbar trailer outfit to gross something like 56 tons; perhaps there would be as much difficulty in this respect as in having conventional, American type double-bottom combinations accepted.

The two new city-type single-deck buses shown by Fiat have integral 11-metre bodies and make for an interesting comparison. The 421A prototype is to the specification of Fedetram, an association of a number of city undertakings including Rome, Naples, Turin and Milan. The development is not comparable with the German VoV standard bus but is more akin to the work done by a number of Dutch municipalities in agreeing to a common specification. The result is a robust, heavy vehicle which one would tend to call overspecified if the design had been developed solely by a manufacturer. The 421A has 14 seats and room for 89 standees. It has a 13.8-litre 250 bhp underfloor engine (at the front end), air suspension and single 12.00-20 radial tyres all round.

The prototype bus for the same type of duty but developed by Fiat for smaller undertakings is the 418A and this has 19 seats and room for 81 standing. It is a very much lighter construction with 9.8 litre 180 bhp underfloor engine, combined air and leaf-spring suspension and 10.00-20 tyres with twins at the rear.

Further psv interests on the Fiat stand relates to coaches. Italian customers get the chance to see the 343 for the first time since its introduction in Paris last year. This 11-metre coach model has air suspension and departs from the usual Fiat practice in having its 9.8 litre 190 bhp horizontal diesel at the rear; other Fiat psv have mid-underfloor power units. The 308 has been lengthened to make the 308L featured on the stand, this one being 10.15 metres overall and having the same engine as the 343 located within its wheelbase.

Mediurnweights Main changes to Fiat goods models are applied to the mediumweight range. The four-cylinder diesel fitted in the 616N and 625N and the six-cylinder engine in the 650N, 662N and the 672N have a 5mm increase in bore diameter to 100mm. The capacity of the four-cylinder goes up from 3.12 litres to 3.46 litres and the six-cylinder model from 4.68 to 5.18 litres and there are corresponding increases in output from 70 to 81.5 bhp and from 110 to 122 bhp respectively.

There have already been examples of units from one partner in the Fiat-OM-Unic grouping used in a vehicle of a different make. In the latest Unic model introduced at the Paris Show with Fiat's heavy-range cab but in tilt form, a Fiat gearbox and rear axle are used behind the Unic 292 bhp