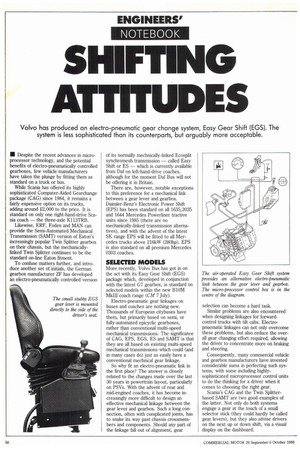 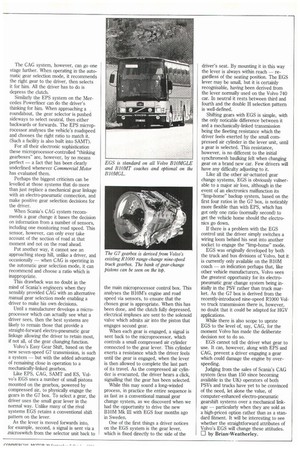 Page 40, 29th September 1988 — SHIFTING ATTITUDES
Close
Noticed an error?
If you've noticed an error in this article please click here to report it so we can fix it.

• Despite the recent advances in microprocessor technology, and the potential benefits of electro-pneumatically controlled gearboxes, few vehicle manufacturers have taken the plunge by fitting them as standard on a truck or bus.

While Scania has offered its highly sophisticated Computer-Aided Gearchange package (CAG) since 1984, it remains a fairly expensive option on its trucks, adding around 22,000 to the price. It is standard on only one right-hand-drive Scalia coach — the three-axle K113TRB, Likewise, ERF, Paden and MAN can provide the Semi-Automated Mechanical Transmission (SAMT) version of Eaton's increasingly popular Twin Splitter gearbox on their chassis, but the mechanicallylinked Twin Splitter continues to be the standard on-line Eaton fitment, To confuse matters further, and introduce another set of initials, the German gearbox manufacturer ZF has developed an electro-pneumatically controlled version of its normally mechnically-linked Ecosplit synchromesh transmission — called Easy Shift or ES — which is currently available from Daf on left-hand-drive coaches, although for the moment Daf Bus will not be offering it in Britain.

There are, however, notable exceptions to this preference for a mechanical link between a gear lever and gearbox. Daimler-Benz's Electronic Power Shift (EPS) has been standard on all 1635,2035 and 1644 Mercedes Powerliner tractive units since 1985 (there are no mechanically-linked transmission alternatives), and with the advent of the latest SK range EPS will be fitted to all Mercedes trucks above 216kW (280hp). EPS is also standard on all premium Mercedes 0303 coaches.

More recently, Volvo Bus has got in on the act with its Easy Gear Shift (EGS) package which, developed in conjunction with the latest G7 gearbox, is standard on selected models within the new BlOM MkIII coach range (CM 7 July).

Electro-pneumatic gear linkages on buses and coaches are nothing new. Thousands of European citybuses have them, but primarily based on semi, or fully-automated epicyclic gearboxes, rather than conventional multi-speed mechanical transmissions. The significance of CAG, EPS, EGS, ES and SAMT is that they are all based on existing multi-speed mechanical transmissions which could (and in many cases do) just as easily have a conventional mechnical gear linkage.

So why fit an electro-pneumatic link in the first place? The answer is closely related to the changes made over the last 30 years in powertrain layout, particularly on PSVs. With the advent of rear and mid-engined coaches, it has become increasingly more difficult to design an effective mechanical linkage between the gear lever and gearbox. Such a long connection, often with complicated joints, has to snake its way past chassis crossmembers and components. Should any part of the linkage fall out of alignment, gear The air-operated Easy Gear Shift system provides an alternative electro-pneumatic link between the gear lever and gearbox. The micro-Processor control box is in the centre of the diagram.

selection can become a hard task.

Similar problems are also encountered when designing linkages for forwardcontrol trucks with tilt cabs. Electropnuematic linkages can not only overcome these problems, but also reduce the overall gear changing effort required, allowing the driver to concentrate more on braking and steering.

Consequently, many commercial vehicle and gearbox manufacturers have invested considerable sums in perfecting such systems, with some including highlysophisticated microprocessor control units to do the thinking for a driver when it comes to choosing the right gear.

Scania's CAG and the Twin Splitterbased SAMT are two good examples of the latter. Not only do both systems engage a gear at the touch of a small selector stick (they could hardly be called gear levers), but they also advise drivers on the next up or down shift, via a visual display on the dashboard. The CAG system, however, can go one stage further. When operating in the automatic gear selection mode, it recommends the right gear to the driver, then selects it for him. All the driver has to do is depress the clutch.

Similarly the EPS system on the Mercedes Powerliner can do the driver's thinking for him. When approaching a . roundabout, the gear selector is pushed sideways to select neutral, then either backwards or forwards. The EPS microprocessor analyses the vehicle's roadspeed and chooses the right ratio to match it. (Such a facility is also built into SAMT).

For all their electronic sophistication these microprocessor-controlled "thinking gearboxes" are, however, by no means perfect — a fact that has been clearly underlined whenever Commercial Motor has evaluated them.

Perhaps the biggest criticism can be levelled at those systems that do more than just replace a mechanical gear linkage with an electro-pneumatic connection, and make positive gear selection decisions for the driver.

When Scania's CAG system recommends a gear change it bases the decision on information from a number of sensors, including one monitoring road speed. This sensor, however, can only ever take account of the section of road at that moment and not on the road ahead.

Put another way, it cannot see an approaching steep hill, unlike a driver, and occasionally — when CAG is operating in the automatic gear selection mode, it can recommend and choose a ratio which is inappropriate.

This drawback was no doubt in the mind of Scania's engineers when they sensibly provided CAG with an alternative manual gear selection mode enabling a driver to make his own decisions.

Until a manufacturer develops a microprocessor which can actually see what a driver sees, then the best systems are Likely to remain those that provide a straight-forward electro-pneumatic gear linkage allowing the driver to retain most, if not all, of the gear changing function.

Volvo's Easy Gear Shift, based on the new seven-speed G7 transmission, is such a system — but with the added advantage of remaining close in operation to a mechanically-linked gearbox.

Like EPS, CAG, SAMT and ES, Volvo's EGS uses a number of small pistons mounted on the gearbox, powered by compressed air, to physically engage the gears in the G7 box. To select a gear, the driver uses the small gear lever in the normal way. Unlike many of the rival systems EGS retains a conventional shift pattern on the lever.

As the lever is moved forwards into, for example, second, a signal is sent via a .microswitch from the selector unit back to the main microprocessor control box. This analyses the B 10M's engine and road speed via sensors, to ensure that the chosen gear is appropriate. When this has been done, and the clutch fully depressed, electrical impluses are sent to the solenoid valve which admits air into the piston that engages second gear.

When each gear is engaged, a signal is sent back to the microprocessor, which controls a small compressed air cylinder connected to the gear lever. This cylinder exerts a resistance which the driver feels until the gear is engaged, when the lever is then allowed to complete the last part of its travel. As the compressed air cylinder is evacuated, the driver hears a click, signalling that the gear has been selected.

While this may sound a long-winded process, in practice the entire sequence is as fast as a conventional manual gear change system, as we discoverd when we had the opportunity to drive the new BlOM Mk III with EGS four months ago in Sweden.

One of the first things a driver notices on the EGS system is the gear lever, which is fixed directly to the side of the driver's seat. By mounting it in this way the lever is always within reach — regardless of the seating position. The EGS lever may be small, but it is certainly recognisable, having been derived from the lever normally used on the Volvo 740 car. In neutral it rests between third and fourth and the double H selection pattern is well-defined.

Shifting gears with EGS is simple, with the only noticable difference between it and a mechanically-linked transmission being the fleeting resistance which the driver feels exerted by the small compressed air cylinder in the lever unit, until a gear is selected. This resistance, however, is no different to the initial synchromesh baulking felt when changing gear on a brand new car. Few drivers will have any difficulty adjusting to it.

Like all the other air-actuated gear change systems, EGS is obviously vulnerable to a major air loss, although in the event of an electronics malfunction its "limp-home" backup system, based on the first four ratios in the G7 box, is noticably more flexible than with EPS, which has got only one ratio (normally second) to get the vehicle home should the electronics go down.

If there is a problem with the EGS control unit the driver simply switches a wiring loom behind his seat into another socket to engage the "limp-home" mode.

EGS was originally developed by both the truck and bus divisions of Volvo, but it is currently only available on the BlOM coach — an indication perhaps that, like other vehicle manufacturers, Volvo sees the greatest opportunity for its electropneumatic gear change system being initially in the PSV rather than truck market. As the G7 box is derived from the recently-introduced nine-speed R1000 Volvo truck transmission there is, however, no doubt that it could be adapted for HGV applications.

While there is also scope to uprate EGS to the level of, say, GAG, for the moment Volvo has made the deliberate decision not to do so.

EGS cannot tell the driver what gear to use. It can, however, along with EPS and CAG, prevent a driver engaging a gear which could damage the engine by overspeeding.

Judging from the sales of Scania's CAG system (less than 150 since becoming available in the UK) operators of both PSVs and trucks have yet to be convinced of the need, let alone the value, of computer-enhanced electro-pneumatic gearshift systems over a mechanical linkage — particularly when they are sold as a high-priced option rather than as a standard fitment. It will be interesting to see whether the straightforward attributes of Volvo's EGS will change these attitudes.