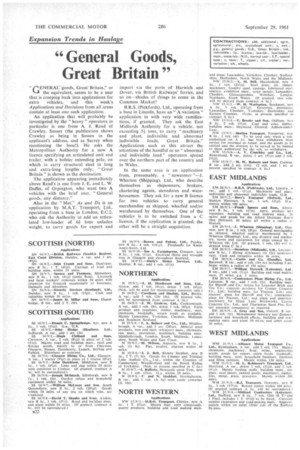 Page 56, 29th September 1961 — Expansion Trends in Haulage
Close
Noticed an error?
If you've noticed an error in this article please click here to report it so we can fix it.

"GENERAL-goods, Great 'Britain," or the equivalent, seems to be a user that is creeping back into applications for extra vehicles, and 'this week's Applicalions and Decisions from all areas contain at least one such application.

An application that will probably be investigated by the " heavy " operators in particular is one from A. J. Read of Crawley, Sussex (the publication shows Crawley as being in Sussex in the applicant's address, and as Surrey when mentioning the base?). He asks the Metropolitan Authority for a new A licence specifying an articulated unit and trailer, with a bolster extending pole. on which to carry structural steel in long and extra-long lengths only; "Great Britain" is shown as the destination.

The application appearing immediately above Read's is one from J. E. and L. W. Daffin, of Orpington, who want two A vehicles with the brief user, "General goods, any distance."

Also in the "Met." As and Ds is an application by M.A.T. Transport, Ltd., operating from a base in London, E.C.2, who ask the Authority to add an articulated low-loader of 6+ tons unladen weight, to carry goods for export and

import via the ports of Harwich and Dover, via British Railways' ferries, and so on-shades of things to come in the Common Market?

B.R.S. (Pickfords), Ltd., operating from a base in Lincoln, have an " A variation" application in with very wide ramifications, if granted. They ask the East Midlands Authority for a vehicle, not exceeding SI tons, to carry "machinery and plant, indivisible and abnormal indivisible loads, Great Britain." Applications such as this attract the attentions of the handful or so " abnormal and indivisible load" operators spread over the northern part of the country and in Wales.

In the same area is an application from, presumably, a " newcomer "-J. Wharton (Shipping), Ltd., who describe themselves as shipowners, brokers, chartering agents, stevedores and warehousemen. They ask for a new B licence for two vehicles to carry general merchandise as shipped, wharfed andfor warehoused by themselves. One of the vehicles is to be switched from a C licence, if the application is granted; the other will be a straight acquisition.