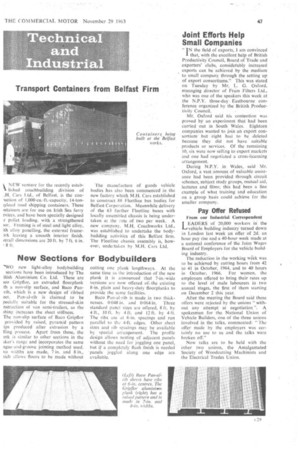 " TN the field of exports, I am convinced

that, with the excellent help of British PrOductivity Council, Board of Trade and exporters' clubs, considerably increased exports can be achieved by the medium to small company through the setting up of export consortiums." This was stated on Tuesday by Mr. L. G. Oxford, Managing director of Fram •Filters Ltd., who was one of the speakers this week at the N.P.Y. three-day. Eastbourne conference organized by the 'British Produc

Mr. Oxford said his contention was proved by an experiment that had been carried out in South Wales. Eighteen companies wanted to join an export consortium but eight had to be ,deleted because they did not have suitable products or services. Of the remaining 10, six were now selling to export markets and one had negotiated a cross-licensing arrangement.

During N.P.Y. in Wales, said Mr. Oxford, a vast .amount of valuable assistance had been provided through circuit schemes, subject study groups, mutual aid, lectures and films; this had been a fine example of what training and education on a group basis could achieve for the smaller company.

From our Industrial, Correspondent

LEADERS of 20,000 workers the LA vehicle building industry turned down in London last. week an offer of 2d. an hour pay rise and a 40-hour week made at a national conference of the Joint Wages Board of Employers for the vehicle build•

ing industry. ' The reduction in the working week was to be achieved by cutting hours from 42 to 41 in October, 1964, and to 40 hours in October, 1966. For women, the employers offered to bring their rates up to the level Of male labourers in two annual stages, the first of 'them starting on December 2 this year.

After the meeting the Board said these offers were rejected by the unions "without any attempt at negotiation ". A spokesman for the National Union of Vehicle Builders, One of the three unions involved in the talks, commented; "The offer made by the employers was certainly no use to us and the talks were broken off."

Now talks arc to be held with the other two unions, the Amalgamated Society of Woodcutting Machinists and the Electrical Trades Union.