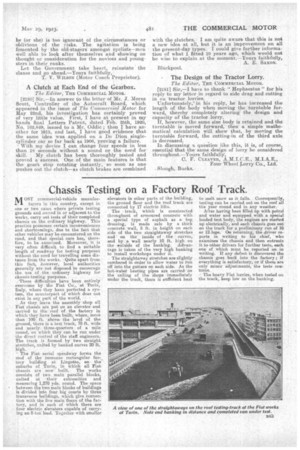 Page 29, 29th May 1923 — Chassis Testing on a Factory Roof Track.
Close
Noticed an error?
If you've noticed an error in this article please click here to report it so we can fix it.

M OST commercial-vehicle manufac turers "in this country, except in one or two cases where private testing grounds and owned in or adjacent to the works, carry out tests a their completed chassis on the ordinary highway. This practice possesses certain inconveniences and shortcomings, due to the fact that other vehicles may be encountered on the read, and that special care has, therefore, to be exercised. Moreover, it is very often difficult to find a suitable length of roadway for testing purposes without the need for travelling some distance from the works. • Quite apart from this fact, however, local authorities generally are -not disposed to encourage the use of the ordinary highway for chassis-testing purposes.

These difficulties have been entirely overcame by the Fiat Co., at Turin, Italy, where they have perfected a system, the counterpart Of Which does not, exist in any part of the world. •

As they leave the assembly shop all Fiat chassis are put on an elevator and carried to the roof of. the factory in which they have been built, where, more than 100 ft. -above the level of the ground, there is a test track, 78 ft. wide and nearly, three-quarters. of a mile round, on which they can be run under the direct control a the staff. engineers. The track is farmed by two straight, stretches, united by banked curves 20 ft. high.

The Fiat aerial speedway forms the roof of the immense rectangular fie,tory building at Lingotto, on the suburbs of Turin, in which all Fiat chassis are new built. The works consists of two main parallel blocks, united at their extremities and measuring 1,270 yds. round. The space between the two main blocks of buildings is divided into four big courts by three transverse buildings, which give connection with the five main doors of the factory, and in each of which there are four electric elevators capable of carrying an 8-ton load. Together with smaller

elevators in other parts of the building, the ground floor and the roof track are connected by 17 electric lifts.

The track, which is constructed throughout of armoured concrete with a special type of asphalt as a top dressing, is made safe by a thick concrete. wall, 5 ft. in height on each side of the two straightaway stretches and on the inside of the curves, and by a wall nearly 10 ft. high on the eutside of the banking. Advantage is taken of the very high banking to install workshops under it. The straightaway stretches are slightly cambered in order to allow Water to run off into the gutters on each side. As the hot-water heating pipes are carried on the ceiling of the shops immediately under the track, there is sufficient heat to melt snow as it falls. Consequently, testing can be carried out oa the roof all the year round and in any weather. After having been filled up with petrol and water and equipped with a special loaded test body, the engines are started up electrically, and each chassis goes out on the track for a preliminary run of 10 or 12.1aps. On returning, the driver reports in writing to his chief, who examines the chassis and then entrusts it to other drivers for further tests, each one of which must be reported on in writing. If any defect is discovered the chassis goes back into the factory ; if everything is satisfactory, or if there are only minor adjustments, the tests continue.

The heavy Fiat lorries, when tested on the track, keep law on the banking.