A New Automatic Brake for Trailers 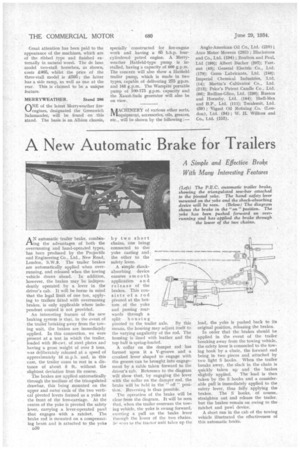 Page 104, 29th June 1934 — A New Automatic Brake for Trailers
Close
Noticed an error?
If you've noticed an error in this article please click here to report it so we can fix it.

A Simple and Effective Brake With Many Interesting Features

AN automatic trailer brake, combining the advantages of both the overrunning and hand-operated types, has been produced by the Projectile and Engineering Co., Ltd., New Road, London, S.W.8. The trailer brakes are automatically applied when overrunning, and released when the towing vehicle draws ahead. In addition, however, the brakes may be independently operated by a lever in the driver's cab. It will be borne in mind that the legal limit of one ton, applying to trailers fitted with overrunning brakes, is only applicable where independent control is not provided.

An interesting feature of the new braking system is that, in the event of the trailer breaking away from the towing unit, the brakes are immediately applied. In this connection, we were present at a test in which the trailer, loaded with 30-cwt. of steel plates and having a gross weight of over 3 tons, was deliberately released at a speed of approximately 16 m.p.h. and, in this case, the trailer came to rest in a distance of about 5 ft without the slightest deviation from its course.

The brakes are applied automatically through the medium of the triangulated drawbar, this being mounted on the upper and outer ends of the two vertical pivoted levers formed as a yoke at the front of the fore-carriage. At the centre of the yoke is pivoted the safety lever, carrying a lever-operated pawl that engages with a ratchet. The brake rod is mounted on a compensating beam and is attached to the yoke n50

by two short chains, one being' connected to thei yoke casting and; the other to the safety lever. •

A simple shockabsorbing device ensures smooth application an d release of the brakes. This consists of a rod pivoted at the bottom of the yoke and passing rearwards through a split housing pivoted to the trailer axle. By this 'means, the housing may adjust itself to the varying angularity of the rod. The housing is lined with leather and the top half is spring-loaded.

A collar on the damper rod has formed upon it a V-groove and a cranked lever shaped to engage with the groove can be brought into engagement by a cable taken forward to the driver's cab. Reference to the diagram will show that, by engaging the lever with the collar on the damper rod, the brake will he held in the " off " position. Reversing is thus possible.

The operation of the brake will be clear from the diagram. It will be seen that, when the trailer overruns the towing vehicle, the yoke is swung forward, ,exerting a pull on the brake lever through the lower of the two chains. S° coon as the tra:a or unit takes up the load, the yoke is pushed back to its original position, releasing the brakes.

In order that the brakes should be applied in the event of the trailer breaking away from the towing vehicle, the safety lever is connected to the towing hook by a chain, the forward end being in two pieces and attached by two light S hooks. When the trailer breaks away, the slack in the chain is quickly taken up and the brakes slightly applied. The load is then taken by the S hooks and a considerable pull is immediately applied to the safety lever, thus fully applying the brakes. The S hooks, of course, straighten out and release the trailer, but the brakes remain on owing to the ratchet and pawl device.

A short run in the cab of the towing vehicle illustrated the effectiveness of this automatic brake.