What next on the boxl CAS, according to Scanig 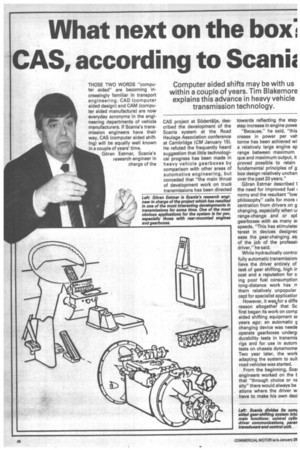 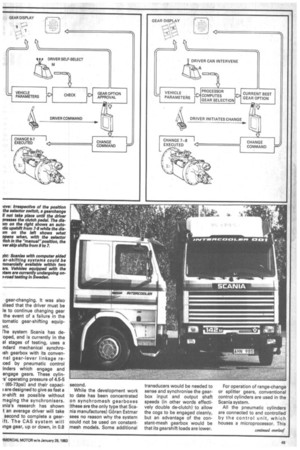 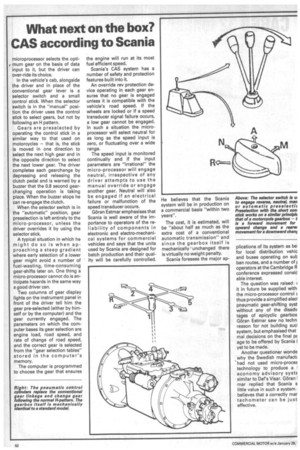 Page 50, 29th January 1983 — What next on the boxl CAS, according to Scanig
Close
Noticed an error?
If you've noticed an error in this article please click here to report it so we can fix it.
Keywords : Mechanical Engineering, Mechanics, Physics, Volkswagen, Gears, Automatic Transmission, Gear Stick, Transmission, Scania, Gear Shift, Truck, Manual Transmission, Technology / Internet

Computer aided shifts may be with us within a couple of years. Tim Blakemore explains this advance in heavy vehicle transmission technology.

Goran Estmar, Scania's research engineer in charge of the CAS project at Sodertalje, described the development of the Scania system at the Road Haulage Association conference at Cambridge (CM January 15). He refuted the frequently heard suggestion that little technological progress has been made in heavy vehicle gearboxes by comparison with other areas of automotive engineering, but conceded that '-'the main thrust of development work on truck transmissions has been directed towards reflecting the step step increase in engine powe "Because," he said, "this crease in power per veh tonne has been achieved wi a relatively large engine sp range between maximum que and maximum output, it proved possible to retain fundamental principles of g box design relatively unchan over the past 20 years."

Goran Estmar described the need for improved fuel ( nomy and the resultant "low philosophy" calls for more ( centration from drivers on g changing, especially when ul range-change and or spl gearboxes with as many a; speeds. "This has stimulatec terest in devices designec ease the gear-changing asi of the job of the professk driver," he said.

However, it wasifor a diffe reason altogether that Sc first began its work on comp aided shifting equipment SE years ago: an automatic g changing device was neede operate gearboxes undergi durability tests in transmis rigs and for use in autom tests on chassis dynamome Two year later, the work adapting the system to suit road vehicles was started.

From the beginning, Scal engineers worked on the t that "through choice or ne sity" there would always be ations where the driver w have to make his own deci gear-changing. It was also )1ised that the driver must be le to continue changing gear the event of a failure in the tomatic gear-shifting equipmt.

rhe system Scania has deoped, and is currently in the al stages of testing, uses a ndard mechanical synchroish gearbox with its convennal gear-lever linkage reiced by pneumatic control inders which engage and engage gears. These cylin-s' operating pressure of 4.5-5 (65-73psi) and their capaci; are designed to give as fast a )r-shift as possible without maging the synchronisers. Inia's research has shown t an average driver will take second to complete a gearft. The CAS system will Inge gear, up or down, in 0.8

While the development work to date has been concentrated on synchromesh gearboxes (these are the only type that Scania manufactures) Geran Estmar sees no reason why the system could not be used on constantmesh models. Some additional transducers would be needed to sense and synchronise the gearbox input and output shaft speeds (in other words effectively double de-clutch) to allow the cogs to be engaged cleanly, but an advantage of the constant-mesh gearbox would be that its gearshift loads are lower. For operation of range-change or splitter gears, conventional control cylinders are used in the Scania system.

All the pneumatic cylinders are connected to and controlled by the control unit, which houses a microprocessor. This microprocessor selects the optimum gear on the basis of data input to it, but the driver can over-ride its choice.

Gears are preselected by operating the control stick in a similar way to that used on motorcycles — that is, the stick is moved in one direction to select the next high gear and in the opposite direction to select the next lower gear. The driver completes each gearchange by depressing and releasing the clutch pedal and is warned by a buzzer that the 0.8 second gearchanging operation is taking place. When the buzzer stops he can re-engage the clutch.

When the selector switch is in the "automatic" position, gear preselection is left entirely to the micro-processor, unless the driver overrides it by using the selector stick.

A typical situation in which he might do so is when approaching a steep gradient where early selection of a lower gear might avoid a number of fuel-wasting, time-consuming gear-shifts later on. One thing a micro-processor cannot do is anticipate hazards in the same way a good driver can.

The computer is programmed to choose the gear that ensures the engine will run at its most fuel efficient speed.

Scania's CAS system has a number of safety and protection features built into it.

An override rev protection device operating in each gear ensures that no gear is engaged unless it is compatible with the vehicle's road speed. If the wheels are locked or if a speed transducer signal failure occurs, a low gear cannot be engaged. In such a situation the microprocessor will select neutral for as long as the speed input is zero, or fluctuating over a wide range.

The speed input is monitored continually and if the input parameters are "irrational" the micro-processor will engage neutral, irrespective of any driver attempts to use the manual override or engage another gear. Neutral will also be engaged if an electrical failure or malfunction of the speed transducer occurs.

Goran Estmar emphasises that Scania is well aware of the importance to operators of the reliability of components in electronic and electro-mechanical systems for commercial vehicles and says that the units used by Scania are designed for batch production and their quality will be carefully controlled. He believes that the Scania system will be in production on a commercial basis "within two years".

The cost, it is estimated, will be "about half as much as the extra cost of a conventional automatic transmission" and since the gearbox itself is mechanically unchanged there is virtually no weight penalty.

Scania foresees the major ap plications of its system as be for local distribution vehic and buses operating on sub ban routes, and a number of j operators at the Cambridge R conference expressed consid able interest.

The question was raised: it in future be supplied with the micro-processor control E thus provide a simplified elecl pneumatic gear-shifting syst without any of the disadv tages of epicyclic gearbox Goran Estmar saw no techn reason for not building sucl system, but emphasised that mal decisions on the final cE age to be offered by Scania I yet to be made.

Another questioner wonde why the Swedish manufacti had not used micro-proces technology to produce a 1 economy advisory systE similar to Daf's Visar. Gam I mar replied that Scania s little value in such a system believes that a correctly mar tachometer can be just effective.