Yet another examination body? 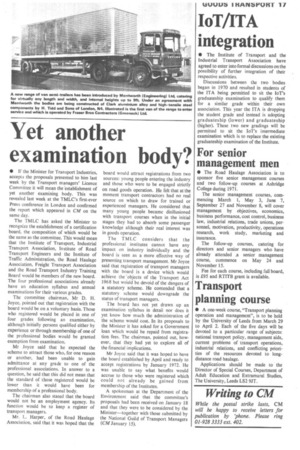 • If the Minister for Transport Industries, accepts the proposals presented to him last week by the Transport managers' Licence Committee it will mean the establishment of yet another examining body. This was revealed last week at the TMLC's first-ever Press conference in London and confirmed the report which appeared in CM on the same day.

The committee chairman, Mr D. H. Joyce, pointed out that registration with the board would be on a voluntary basis. Those who registered would be placed in one of four grades following an examination, although initially persons qualified either by experience or through membership of one of the professional bodies would be granted exemption from examination.

Mr Joyce said that he expected the scheme to attract those who, for one reason or another, had been unable to gain admittance at any grade to one of the professional associations. In answer to a question, he said that this did not mean that the standard of those registered would be lower than it would have been for membership of a professional body.

The chairman also stated that the board would not be an employment agency. Its function would be to keep a register of transport managers.

Mr. U. Harper, of the Road Haulage Association, said that it was hoped that the board would attract registrations from two sources: young people entering the industry and those who were to be engaged strictly on road goods operation. He felt that at the moment transport contractors had no real source on which to draw for trained or experienced managers. He considered that many young people became disillusioned with transport courses when in the initial stages they had to absorb some passenger knowledge although their real interest was in goods operation.

The board has not yet drawn up an examination syllabus in detail nor does it yet know how much the administration of the scheme would cost.. In its proposals to the Minister it has asked for a Government loan which would be repaid from registration fees. The chairman. pointed out, however, that they had yet to explore all of the financial implications.

Mr Joyce said that it was hoped to have the board established by April and ready to accept registrations by January 1972. He was unable to say what benefits would accrue to those who were registered which could not already be gained from membership of the Institutes.

A spokesman at the Department of the Environment said that the committee's proposals had been received on January 18 and that they were to be considered by the Minister—together with those submitted by the National Guild of Transport Managers (CM January 15).