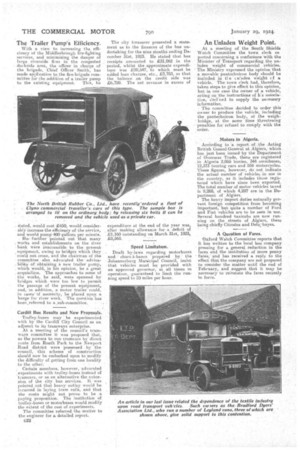 With a view to increasing the efficiency of the Middlesbrough fire-fighting services, and minimizing the danger of large riverside fires in the congested dockside area, the 'officer in charge of the -brigade, Chief Officer Smith, has made application to the fire-brigade committee for the addition of a trailer pump to the existing equipment. This, ho

stated, _would cost £450, would considerably increase the efficiency of the service, and would pump400-gallons per minute.

• Hefurther' 'pointed out that many , works and establishments on the liver bank were inaccessible to the present

• equipment', owing to bridges which they could not cross, and the chairman of the committee also advocated the ad visa.

bilay of obtaining a new trailer pump, . which would, in his opinion, be a great , acquisition. The approaches to some of . the works he said, were spanned by bridges which were too low to permit the passage of the present equipment, and, in addition, a motor trailer could, in cases of necessity, be placed upon a barge for river work. The question has been referred to a ..sub-committee..

Cardiff Bus Results and New Proposals. 'Trolley-buses may be experimented with by the Cardiff City Council as an adjunct to its tramways enterprise. At a meeting of the council's tramways committee it was proposed that, as the powers to run tramcars by direct route from Roath Park to the Newport Road district were possessed by the council, this scheme of construction should now he embarked upon to modify the difficulty of getting from one locality to the other.

Certain members, however, advocated • experiments with trolley-buses instead of tramcars, or as an alternative the extension of the city bus services. It was • printed out that heavy outlay would be ir.curred in laying tram rails, and that the route might not prove to be a .paying proposition. The institution of trolley-buses or motorbuses would modify the extent of the cost of experiments. The committee referred-the matter to the engineer for a detailed report. 622 The city treasurer presented a statement as to the finances of the bus undertaking for the nine Months ending December 31st, 1923. He stated that bus receipts amounted to £31,062 in the period, whilst the approximate expenditure was £20,547, to which must be added loan charges, etc., £3,783, so that the balance on the credit side was Z6,729. The net revenue in excess of expenditure at the end of the year was, after making allowance for a deficit of £1,160 outstanding on March 31st, 1923, £5,568.

Draft by-laws regarding motorbuses and chars-a-buries prepared by the Johannesburg Municipal Council, insist that vehicles must be provided with an approved governor, at all times in operation, guaranteed to limit the running speed to 20 miles per hour.