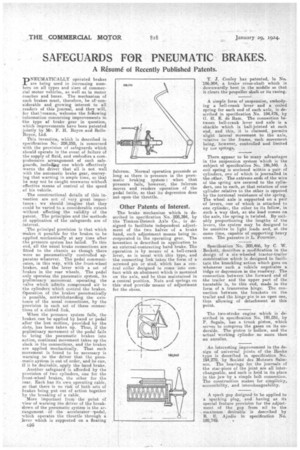 Page 34, 29th January 1924 — SAFEGUARDS FOR PNEUMATIC BRAKES.
Close
Noticed an error?
If you've noticed an error in this article please click here to report it so we can fix it.

pNETIMATICALLY operated brakes _L are being used in increasing numbers on all types and sizes of commercial -motor vehicles, as well as in motor coaches and buses. The mechanism of such brakes must, therefore, be of-considerable and growing interest to all , readers of this journal, and they will, for that-reason, welcome the following -informationconcerning improvements in the type of brake gear in question, which improvements have been patented -jointly by MT. F. H. Royce and RollsRoyce, Ltd.

This invention, which is described in specification No. 208250, is concerned with the provision of safeguards which should operate in the event of failure of the supply of fluid, and embodies a coinpreltensive arrangement of such safeguards, including one which effectively warns the driver that all is not well with the automatic brake gear, conveying that warning in ample time, so that he may not be caught unawares withat -effective means of control of the speed , of his vehicle.

;The construct-ire-Jai details of this invention are not of very great. importance we should imagine that they could be varied to a considerable extent without affecting the validity of the patent. The principles and the methods of application of the safeguards are of interest.

The principal provision is that which makes it possible for the brakes to he -applied mecioanically at any time after the pressure system has failed. To this end, all the usual brake connections are fitted tothe chassis as though there were no pneumatically controlled apparatus whatever. The pedal communieates, in this way, with the front-wheel . brakes, and the lever with a set of 'brakes in the rear wheels. The pedal only operates the pneumatic system, its preliminary movement operating the valve which admits compressed air to the cylinderswhich control the brakes. Operation of the brakes pneurnatically is possible, notwithstanding the existence of the usual connections, by the 'provision in each set of these connections of a slotted link.

When the pressure system fails, the • brakes,can be applied by hand or pedal after the lost motion, provided by the sluts, has been taken up. Thus, if the preliminary movement of the pedalfails to bring the pneumatic brakes into action, continual movement takes up the slack in the connections, and the brakes -are applied mechanically. That such movement is found to be necessary is warning to the driver that the prieurnatie system is out of order, and he can, if it be desirable, apply the hand brake.

Another safeguard is afforded by the provision of two cylinders, one for the front-wheel brakes, the other for the rear. Each has its own operating cable, so that there is no risk of both sets of brakes being. put out of action together by the breaking of a cable.

More important from the point of view of warning the driver of the breakdown of the pneumatic system is the arrangement ofthe accelerator --pedal, which operates the throttle through a ,lover which is supported on a floating C60

The brake mechanism which is described in specification No, 208,394, by the Tim-ken-Detroit Axle Co., is designed to facilitate independent adjustment of the two halves of a brake band, such adjustment means being in-. corporated in the operating gear. The do-vent-ion is described in application to an external-contracting band brake. The ;operation is by means of a hell-crank lever, as is usual with this type, and the connecting link takes the form of a screwed pin or stud, which has a central collar designed to come -into contact with an abutment which is mounted on the axle, and be thus maintained in a central position. Nuts arid springs on -this stud provide -means of adjustment for the shoes. • T. J. Conley has patented, in No. 186,904, a brake cross-shaft which is . downwardly bent in the middle &CI that it clears the propeller shaft or its casing.

A simple form of suspension, embodying a bell-crank lever and a coiled spring for each end of each axle, is described in specification No. 184,476, by G. 11. R de Ram. The connection between bell-crank lever and axle is a -shackle which is ball-jointed at each end, and this, it is claimed, . permits 'slight lateral movement to the axle, relative to the frame, such movement being, however, controlled and limited by tne springs.

There, appear to be many advantages in the suspension system which is the subject of specification No. 186,340. A coil spring is enclosed within a pairof cylinders, one of which is journalled in the other. The extreme ends of the -wire of the spring are secured to the cylinders, one to each, se that rotation of one cylinder relative to the other is opposed by the torsional resistance ei the spring. The wheel axle is supported on a pair of levers, one of which is attached to one cylinder, the other to its fellow, in such a way that, as the load comes on the axle, the spring is twisted. By suitably proportioning the lengths of the levers, the system may be designed to be sensitive to light loads and, at the -same time, capable of sup-porting heavy ones. The patentee is L. Fournier.

-Specification No. 208,466, by C. W. Beckett, describes a modification in the design of a six-wheeled tractor-trailer combination which is designed to facilitate, the knuckling action which goes on whenever such a vehicle negotiates a ridge or depression in the roadway. The .connection between the forward end of the trailer and the upper part of the turntable is, to this end, made in the form of a transverse hinge. The connection between the brackets on the trailer and the hinge pin is an open one, thus allowing of detachment at this point.

The two-stroke engine which is described in specification No, 191,051, by P. Segala, has a trunk piston, which serves te compress the gases on its underside. The piston ishollow, and the actual working cylinder no more thanan annulus.

An interesting iinprovement in the design of universal joints of the Hoek° type is described in specifiCa.tion No. 194,270, by Societe des Moteurs Salm-son. The bearings for the journals of the star-piece of the joint are all interchangeable, and each is held in its place in the jaw by a simple bolt connection. The construetion makes for simplicity, accessibility, and interchangeability. • A spark gap designed to be applied to a sparking plug, and having as its special feature provision for the adjustment, of the gap from nil to the . maximum desirable is described by R. E. Ajudio in specification No 189,749.