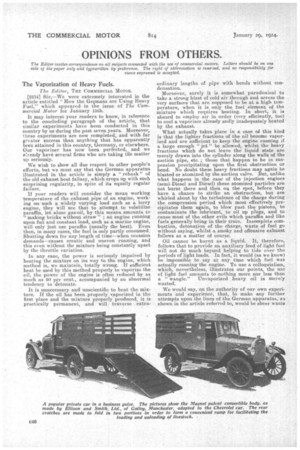 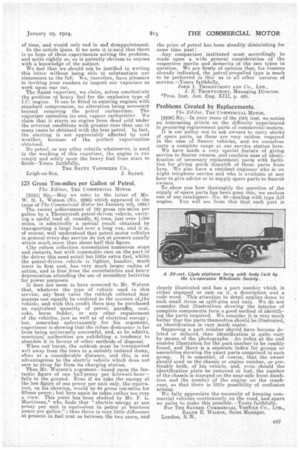 The Vaporization of Heavy Fuels.

[22341 Sir,—We were 'extremely interested in the article entitled " How the Germans are Using Heavy Fuel," which appeared in the issue of The Commercial Motor for January lath.

It may interest your readers to know, in reference to the concluding paragraph of the article, that similar experiments have been conducted in this country by us during the past seven years. Moreover, !hese experiments are now completed, and with far greater success than anything that has apparently been attained in this country, Germany, or elsewhere. Our vaporizer has now been perfected, and we already have several firms who are taking the matter up seriously.

We wish to show all due respect to other people's efforts, but we must say that the German apparatus illustrated in the article is simply a " rehash" of the old exhaust heat fallacy, which crops up with such surprising regularity, in spite of its equally regular failure.

If your readers will consider the mean working 'temperature of the exhaust pipe of an engine, working on such a widely varying load such as a lorry . engine, they will see that to attempt to volatilize paraffin, let alone gasaail, by this means amounts to making bricks without straw" ; an engine running upon full and constant load, such as a marine engine, will only just use paraffin (usually the best). Even then, in many cases, the fuel is only partly consumed. Shutting down for any length of time—when occasion demands—causes erratic and uneven running, and this even without the mixture being constantly upset by the throttle variation.

In any case, the power is seriously impaired by heating the mixture on its way to the engine, which method is, we maintain, totally wrong. If sufficient heat be used by this method properly to vaporize the oil, the power of the engine is often reduced by as much as 50 per cent., accompanied by an abnormal tendency to detonate.

It is unnecessary and unscientific to heat the mixture. If the oil has been properly vaporized in the first place and the mixture properly produced, it is practically permanent, and will traverse extra

ordinary lengths of pipe with bends without condensation.

Moreover, surely it is somewhat paradoxical to take a strong blast of cold air through and across the very surfaces that are supposed to he at a high temperature, when it is only the fuel element of the mixture which requires heating. In short, it is absurd to employ air in order (very efficiently, too) to cool a vaporizer already sadly inadequately heated by the exhaust.

What actually takes place in a case of this kind is that the lighter fractions of the oil become vaporized and are sufficient to keep the engine running if a large enough " jet " be allowed, whilst the heavy fractions which do not leave the liquid state are merely drawn into the cylinder along the walls of the suction pipe, etc. ; those that happen to be in suspension precipitating upon the first obstruction or bend. No doubt these heavy fractions may again be blasted or atomized by the suction valve. But, unlike what happens in the case of the injection engines (semi-Diesel and Diesel) these atomized particles are not burnt there and then oil the spot, before they have a chance to strike an obstruction, but are whirled about by the turbulence of the charge during the compression period which most effectively precipitates them again, to blow past the pistons, to contaminate the lubricant, to oil up plugs, and to cause most of the other evils which paraffin and like fuels generally bring in their train. Incomplete combustion, detonation of the charge, waste of fuel go without saying, whilst a smoky and offensive exhaust follows as a matter of course.

Oil cannot be burnt as a liquid. It, therefore, follows that to provide an auxiliary feed of -light fuel will not do much beyond helping to tide over the periods of light loads. In fact, it would (as we know) be impossible to say at any time which fuel was actually running the engine. To use a colloquialism, which, nevertheless, illustrates our points, the use of light fuel amounts to -nothing more nor less than a "wangle." Unvaporized heavy oil is merely wasted.

We would say, on the authority of our own experiments and experience, that, To make any further attempts upon the lines of the German apparatus, as shown in the article referred to, would be sheer waste of time, and would only end in sad disappointment.

In the article (para. 2) we note it is' said that there is no hope of these experiments solving the problem, and quite rightly so, as is patently obvious to anyone with a knowledge of the subject. We feel that we should not be justified in writing this letter without being able to substantiate our statements to the full. We, therefore, have pleasure in inviting your readers to inspect our vaporizer at work upon our car. The baunt vaporizer, we claim, Solves conclusively • the problem of heavy fuel for the explosion type of LC. engine. It can be fitted to existing engines with standard compression, no alteration being necessary beyond removing the petrol carburetter. The vaporizer embodies its own vapour carburetter. We claim that it starts an engine from dead cold under the severest conditions with greater ease than can in many cases be obtained with the best petrol. In fact, the starting is not appreciably affected by cold weather, because of the perfect vaporization obtained.

No petrol, or any other volatile whatsoever, is used in the working of this vaporizer, the engine is run simply and solely upon the heavy fuel from start to finish—Yours faithfully, • THE SAUNT VAPORIZER CO.,

123 Gross Ton-miles per Gallon of Petrol.

The recent achievement of 123 gross ton-miles per gallon by a Thornycroft petrol-driven vehicle, carryin g a useful load of, roundly, 6-,Ig tons, just over 1,000 miles, is admittedly a special result obtained by transporting a large load over a long run and it is, of course, well understood that petrol motor vehicles in general every-day service do not at present usuafly attain much more than about half this figure. City refuse collection necessitates numerous . stops and restarts, but with reasonable care on the part of the driver this need entail but little extra fuel, whilst the petrol-driven. vehicle is lighter, handier, much lower in first cost, has very much larger radius of action, and is free from the uncertainties and heavy depreciation attending the use of secondary batteries for power purposes.

It does not seem to have occurred to Mr. Watson that whatever the type of vehicle used in this service, any 'heat value the rubbish collected may possess can equally be credited to the account of.the vehicle, and with this credit there may lae purchased an equivalent quantity of petrol, • paraffin, coal, coke, horse fodder, or any• other requirement of the Vehicles, just as well as of electrical energy; but, somewhat unfortunately for his argument,

. experience is showing that the refuse destructor is far from being uniVersally successful, and, as he admits, municipal authorities are exhibiting a tendency to abandon it in favour of other methods of disposal.

When not burnt, the rubbish must be transported well away from the town to a suitably isolated dump, often at a considerable distance, and this is not advantageous to the electric vehicle which does not care to strayfar from its charging station. Thus Mr. Watson's argument—based upon the fantastic figure of one half-penny per kilowatt-hour— falls to the ground. Even if we take the energy at the low figure of one penny per unit only, the equivalent, on his showing, would be 94 gross ton-miles for fifteen pence ; but here again he takes rather too rosy a view. This point has been studied by Mr. F. L. Martineau,* who finds that " electric.energy at one penny per unit is equiv-alent to petrol at fourteen pence pergallon-" ; thus there is very little difference i at present n fuel.cost as between the two eases, and the price of petrol has been steadily •diminishing foi some time past! . .Any. comparison instituted must accordingly be made upon a wide general consideration of the respective merits and demerits of the two types in question. We are firmly of opinion that, for reasons already indicated, the petrol-propelled type is much to be preferred in this as in all other natures of service.—Yours faithfully, JOHN I. THORNYCROET AND CO., LTD.,

[2236] Sir,—In your issue of the 15th inst. we notice an interesting article on the difficulty experienced in procuring replacement parts of commercial motors.

It is our policy not to ask owners to carry stocks of spare parts, as these are very seldom required in the ease of Saurer vehicles, and we ourselves carry a complete range at our service station here.

We have made a very special feature of giving service to Saurer owners, and combine ease of identification of necessary replacement parts with facilities for giving quick dispatch of these parts from here. -We also have a resident engineer who is on night telephone service and who is available at any hour to give advice Or to supply spare parts to Saurer owners.

To show you how thoroughly the question of the supply of spare parts has been gone into, we enclose one of our eatalogues—No. 40—dealing with type AD engine. You will see from this that each part is

clearly illustrated and has a part number which is either stamped or cast on it, a description and a code word. This attention to detail applies down to such small items as split-pins and nuts. We do not congider that illustrations showing the interior of complete components form a good method of identifying the parts required. We consider it is very much better that the parts themselves should be illustrated, as identification is very much 'easier.

Supposing a part number shpuld have become deleted or defaced, then identification is quite easy by means of the photographs. An index at the end enables illustration for the part number to be readily found, and there is a separate index for groups or assemblies showing the exact parts comprised in each group. It is essential, of course, that the owner should send us the chassis or engine number, or pre-. ferably both, of his vehicle, and, even should the identification plate be removed or lost, the number of the chassis is stamped on the near-side front dumbiron and the number of the engine on the crankcase, so that there is little possibility of confusion arising. We fully appreciate the necessity of keeping commercial vehicles continuously on the road, and spare no pains to make this possible.—Yours faithfully,