Coaches to the Relief of Passenger Traffic. 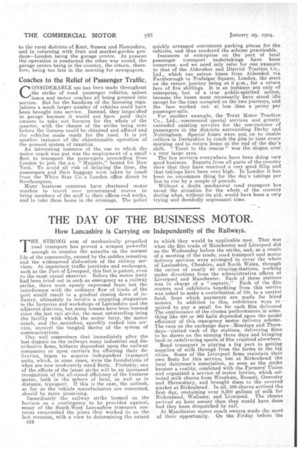 Page 2, 29th January 1924 — Coaches to the Relief of Passenger Traffic.
Close
Noticed an error?
If you've noticed an error in this article please click here to report it so we can fix it.

CONSIDERABLE use has been made throughout the strike of road passenger vehicles, saloon buse,s and motor enriches all being pressed into service. But for the handicap of the licensing regulations a much larger number of vehicles could have been brought into service. Instead, they languished in garage because it would not have paid their owners to take • out licences for the whole of the .quarter, with the chance of the strike being over before the licences could be obtained and affixed and the vehicles made ready for the road. It is yet another instance of the objectionable operation of the present system of taxation.

An interesting instance of the use to which the motor coach was put was the employment of a small fleet to transport the passengers proceeding from London to join the s.s. "Majestic," bound for New York. To avoid all risk of delaying the liner, the passengers and their baggage were taken by coach from the White Star Co.'s London office direct to Sonthampton , Many business concerns have chartered motor coaches to -travel over prearranged. routes to bring in-embers of the staff to their offices and works, and to take them home in the evenings. The police quickly arranged convenient parking places for the vehicles, and thus rendered the scheme practicable. Instances of enterprise on the ' part of local passenger transport undertakings have been numerous, and we need only refer for one example to that of the Aldershot and District Traction Co., Ltd., which ran saloon buses from Aldershot via Farnborough to Trafalgar Square, London, the start on the return journey being at 6 p.m., for a return fare of five shillings. It is an instance not only of enterprise, but of a true public-spirited action, because the buses must necessarily have stood idle except for the time occupied on the two journeys, and the fare worked out at less than a penny per passenger-mile.

For another example, the Trent Motor Traction Co., Ltd.,, commenced special services and greatly extended existing services for the convenience of passengers in the districts surrounding Derby and Nottingham. Special ,buses were put, on to enable colliers in Derbyshire to reach the pits in time every morning and to return home at the end of the day's shift. Trent to the rescue" was the slogan over

The bus services everywhere have been doing very good business. Reports from all parts of the country show that they have received a very good fillip and that takings have been very high. In London it has been no uncommon thing for the day's takings per lens to rise by a couple of pounds. Without a doubt mechanical road transport has saved the situation for the whole of the country during what, without its aid, would have been a very trying and decidedly unpleasant time.