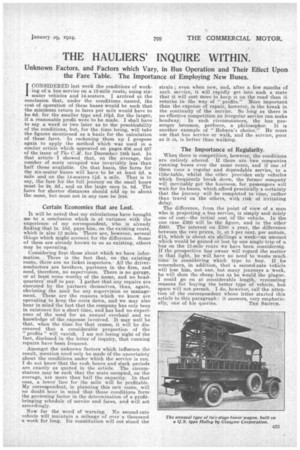 Page 15, 29th January 1924 — THE HAULIERS' INQUIRE WITHIN.
Close
Noticed an error?
If you've noticed an error in this article please click here to report it so we can fix it.

Unknown Factors, and Factors which Vary, in Bus Operation and Their Effect Upon the Fare Table. The Importance of Employing New Buses.

ICONSIDERED last week the conditions of working of a bus service on a 13-mile route; using sixseater vehicles and 14-seaters. I arrived at the conclusion that, under the conditions named, the cost of operation of these buses would be such that the minimum return in fares per mile would have to be 6d. for the smaller type and lOid. for the larger, if a reasonable profit were to be made. I shall have to say a word or two later as to the practicability of the conditions, but, for the time being, will take the figures mentioned as a basis for the calculation of these fares. In reckoning them up I propose again to apply the method which was used in a similar article which appeared on pages 636 and 637 of the issue of The C.M. for December 18th last. In that article I showed that, on the average, the number of seats occupied was invariably less than half those available. On that basis, the fares for the six-seater buses will have to be at least 2d. a mile and on the 14-seaters 11d. a mile. That is to say, the fare for the full journey on the small buses must be 2s. 2d., and on the large ones is. 8d. The fares for shorter distances should add up to about the same, but must not in any case be less.

Certain Economies that are Lost.

It will be noted that my calculations have brought me to a conclusion which is at variance with the experience of my correspondent, who is already finding that Is. 10d. pays him, on the existing route, which is also 13 miles. There are, however, several things which might account for the difference. Some of them are already known to us as existing, others may be operating.

Considering first those about which we have information. There is the fact that, on the existing route, there are no ticket inspectors. All the driverconductors are brothers, partners in the firm, and need, therefore, no supervision. There is no garage, or at least none worthy of the name, and no headquarters' staff to pay. I gather that any repairs are executed by the partners themselves, thus, again, obviating the need for any supervision or management. These are the reasons which we know are operating to keep the costs down, and we may also bear in mind the fact that the company has only been in existence for a short time, and has had no experience of the need for an annual overhaul and no knowledge of the expense involved. It may well be that, when the time for that comes, it will be discovered that a considerable proportion of the " profits " will vanish. I am not losing sight of the fact, disclosed in the letter of inquiry, that running repairs have been frequent.

Amongst the unknown factors which influence the result, mention need only be made of-the uncertainty about the conditions under which the service is run. I do not know that the rush hours and slack periods are exactly as quoted in the article. The circumstances may be such that the seats occupied, on the average, are more than half the capacity. In that case, a lower fare for the mile will be profitable. My correspondent, in planning this new route, will no doubt bear in mind that those conditions form the governing factor in the determination of a profitbringing schedule of service and fares, and will act accordingly.

Now for the word of warning. No second-rate vehicle will maintain a mileage of over a thousand a week for long. Its constitution will not stand the strain; even when new, and, after a few months of such service, it will rapidly get into such a state that it will cost more to keep it on the road• than it returns in the way of "profits." More important than the expense of repair, however, is the break in the continuity of the service. So long as there is no effective competition an irregular service can make headway. In such circumstances, the bus passenger becomes, perforce, a philosopher. It is another example of " Hobson's choice." He must use that bus service or walk, and the service, poor as it is, is better than walking.

The Importance of Regularity.

When there is competition, however, the conditions are entirely altered. If there are two companies running buses over the same route, and if one of them runs a, regular and dependable service, to a tithe-table, whilst the other provides only vehicles which frequently break down, the former company will inevitably get the business, for passengers will wait-for its buses, which afford practically a certainty that the journey will be completed to time; rather than travel on the others, with risk of irritating delay.

The difference, from the point of view of a man who is projecting a bus service, is simply and-solely one of cost—the initial cost Of the vehicle. In the one case 2300 will be the figure, and in the other 2600. The interest on 2300 a year, the difference between the two prices, is, at 5 per cent. per annum, 215, which is about six shillings a week—an amount which would be gained or lost by one single trip of a bus on the 13-mile route we have been considering. If the prospective bus owner will regard the matter in that light, he will have no need to waste much time in considering which type to buy. If he remembers in addition, that a second-rate vehicle -will lose him, not one, but many journeys a week, he will shun the cheap bus as he would the plague. I could go on at considerable length, recounting reasons for buying the better type of vehicle, but space will not permit. I do, however, call the attention of the correspondent whose letter started this article to this paragraph: it answers, very emphatic ally, one of his queries. THE SKOTCH.