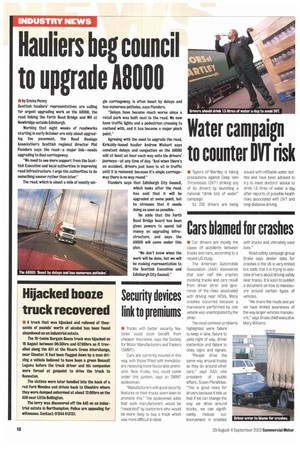 Page 10, 29th August 2002 — Hijacked booze truck recovered
Close
Noticed an error?
If you've noticed an error in this article please click here to report it so we can fix it.

II A truck that was hijacked and relieved of thousands of pounds' worth of alcohol has been found abandoned on an industrial estate.

The 18-tonne Bargain Booze truck was hijacked on 16 August between 06:30hrs and 07:00hrs as it travelled along the A51 at the Vicars Cross interchange, hear Chester. It had been flagged down by a man driving a vehicle believed to have been a green Renault Laguna before the truck driver and his companion were forced at gunpoint to drive the truck to Nuneaton.

The victims were later bundled into the back of a red Ford Mondeo and driven back to Cheshire where they were dumped unharmed at about 12:00hrs on the A56 near Little Bollington.

The lorry was discovered off the A4.5 on an industrial estate in Northampton. Police are appealing for witnesses. Contact: 01244 613131.