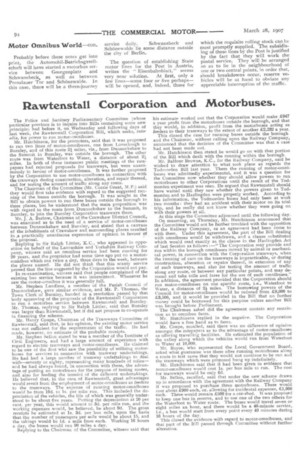 The Police and Sanitary Parliamentary Committee (whose particular province is to inquire into Bills containing some new principle) had before it, on Wednesday and following days of last week, the Rawtenstall Corporation Bill, which seeks, inter alia, for power to run motor-omnibuses. Mr. Hutchinson, for the promoters, said that it was proposed to run two lines of motor-omnibuses, one from Loveclough to Burnley, and of this route 2-1 miles, viz., from Dunnockshaw to the Summit in Burnley, was outside the borough. The other route was from Waterfoot to Water, a distance of about 2i miles. In both of these instances public meetings of the ratepayers had rejected proposals for tramways, but were unanimously in favour of motor-omnibuses. It was further proposed by the Corporation to use motor-omnibuses in connection with the tramways during construction, alteration, and repair thereof, and for testing the amount of traffic along any route. The Chairman of the Committee (Mr. Corrie Grant, M.P.) said they would first take evidence with regard to the suggested running of the buses outside the borough. It was sought in the Bill to obtain powers to run these buses outside the borough to three places, but he understood that the main proposition was with regard to the route from Dunnockshaw to the Summit, in Burnley, to join the Burnley Corporation tramways there. Mr. J. A. Barlow, Chairman of the Crawshaw District Council., was examined as to the need of a service of motor-omnibuses between Dunnockshaw and Burnley, and stated that a canvass of the inhabitants of Crawshaw and surrounding places resulted in ,a practically unanimous expression of opinion in favour of the proposal. Replying to Sir Ralph Littler, K.C., who appeared in opposition on behalf of the Lancashire and Yorkshire Railway Company, witness said an omnibus service had been running for 20 years, and the proprietor had some time ago put on a motoromnibus which ran twice a day, three days in the week, between the places named. He did not think that this scanty service proved that the line suggested by the Corporation would not pay.

In re-examination, witness said that people complained of the existing bus service because it was intermittent. Whenever he saw the motor-omnibus it was generally full.

Mr. Stephen Landless, a member of the Parish Council of Dunnockshaw, gave similar evidence, and Mr. P. Thomas, the Town Clerk of Burnley, handed in a resolution passed by that body approving of the proposals of the Rawtenstall Corporation to run a motorbus service between Rawtenstall and Burnley. Mr. Thomas, replying to Sir Ralph Littler, said that Burnley was larger than Rawtenstall, but it did not propose to co-operate in financing the scheme.

Mr. Henry Coupe, Chairman of the Tramways Committee of Rawtenstall, said that, in his opinion, the existing motor service was not sufficient for the requirements of the traffic. He had made, however, no estimate of the probable receipts.

Mr. Stephen Sellon stated he was a member of the Institute of Civil Engineers, and had a large amount of experience with regard to electric tramways and motor-omnibuses. He claimed to be one of the first who saw the possibility of utilising motorbuses for services in connection with tramway undertakings. He had had a large number of tramway undertakings to deal with—seventy or eighty, representing many hundreds of miles— and he had always found, in connection with these, the advantage of putting on motorbuses for the purpose of testing routes, and also for feeding the termini of the different undertakings. He believed that, in the case of Rawtenstall, great advantages would result from the employment of motor-omnibuses as feeders to the tramways. The expense of running motor-omnibuses would be from 10d. to is, per mile run. This included the depreciation of the vehicles, the life of which was generally understood to be about five years. Potting the depreciation at 20 per cent, per year, this would amount to 3d. per mile run, and the working expenses would, he believed, be about 9d. The gross receipts he estimated at Is. 3d. per bus mile, upon the basis that the number of passengers per mile would be about 15, and the takings would be id. a mile from each. Working 16 hours a day, the buses would run 90 miles a day. Replying to the Chairman of the Committee, witness said that his estimate worked out that the Corporation would make £947 a year profit from the motorbuses outside the borough, and that they would, in addition, profit from the motorbuses acting as feeders to their tramways to the extent of another £2,232 a year. This closed the case for running buses outside the borough and the Chairman, without calling upon the Railway Company, announced that the decision of the Committee was that a case had not been made out.

Mr. Hutchinson then stated he would go on with that portion of the Bill which dealt with the running within the borough.

Mr. Balfour Browne, K.C., for the Railway Company, said he wished to draw attention to what took place as regards the Todmorden Bill last year. There the running of motor-omnibuses was admittedly experimental, and it was a question for the Committee now whether they should allow powers to run motorbuses to other Corporations until the result of the Todmorden experiment was seen. He argued that Rawtenstall should have waited until they saw whether the powers given to Todmorden and to Haslingden were properly worked. According to his information, the Todmorden buses had only been at work two months : they had an accident with their motor on its trial trip, and he really did not know whether they were going on with their powers at all.

At this stage the Committee adjourned until the following day.

On resuming, on Thursday, Mr. Hutchinson announced that the Committee would not be further troubled with the opposition of the Railway Company, as an agreement had been come to with them. Under this agreement, the part of the Bill dealing with omnibuses would be withdrawn, and a clause substituted which would read exactly as the clause in the Haslingden Act of last Session as follows :—" The Corporation may provide and run within the borough omnibuses moved by animal or mechanical power, in connection with the Corporation tramways, when the running of cars on the tramways is impracticable, or during construction, alteration or repairs thereof, in extension of any of such tramways, and also for testing the amount of traffic along any route, or between any particular points, and may demand and take tolls and fares for the use of such omnibuses." In addition, the agreement provided that the Corporation should run motor-omnibuses on one specific route, i.e., Waterfoot to Water, a distance of 24 miles. The borrowing powers of the Council for motor-omnibuses would be reduced from £8,000 to £3,500, and it would be provided in the Bill that no further money could be borrowed for this purpose unless another Bill was brought before Parliament.

The Chairman asked did the agreement contain any restricdon as to omnibus fares.

Mr. Hutchinson replied in the negative. The Corporation would have a free hand as to fares.

Mr. Coupe, recalled, said there was no difference of opinion amongst the ratepayers as to the advantage of motor-omnibuses as offering travelling facilities. He estimated the population of the valley along which the vehicles would run from Waterfoot to Water at 10,000.

Mr. Boyce, who represented the Local Government Board, asked what guarantee was there after running motorbuses along a route to test same that they would not continue to be run aud the tramways which were proposed hung up indefinitely.

Mr. Hutchinson said that it had been given in evidence that motor-omnibuses would cost Is. per bus mile to run. The cost for tramways would be only 6d.

Mr. Sellon, recalled, said that under the new scheme drawn up in accordance with the agreement with the Railway Company it was proposed to purchase three motorbuses. These would cost about £900 each, or, allowing for incidental expenses, £1,000 each. There would remain £500 for a car-shed. It was proposed to keep one bus in reserve, and to use one of the two others for the Waterfoot to Water route. The buses would travel seven or eight miles an hour, and there would be a 413-minute service, i.e., a bus would start from every point every 40 minutes during 16 hours of the day.

This closed the evidence with regard to motor-omnibuses, and that part of the Bill passed through Committee without furtheralteration.