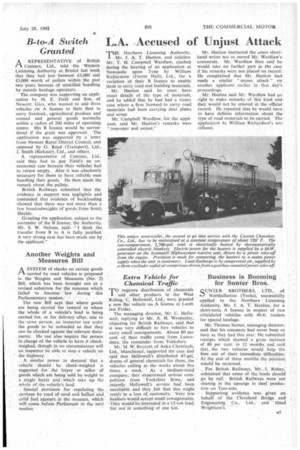 Page 39, 28th July 1961 — L.A. ,Accused of Unjust Attack
Close
Noticed an error?
If you've noticed an error in this article please click here to report it so we can fix it.
Keywords : Hanlon, Wardlaw

THE Northern Licensing Authority, Mr. I. A. T. Hanlon, and solicitor Mr. T. H. Campbell Wardlaw, clashed during the hearing of an application at Newcastle upon Tyne by William Richardson (Forest Hall), Ltd., for a variation of their B licence to enable them to carry road and building materials.

Mr. Hanlon said he. must have exact details of the type of materials, and he added that he had had a recent case where a firm licensed' to carry road materials had been carrying steel plates and scrap.

Mr. Hanlon instructed the court shorthand writer not to record Mr. Wardlaw's comments. Mr. Wardlaw then said he would take no further part in the ease if his remarks were not placed on record. He complained that Mr. Hanlon had made a similar "unjust attack" on another applicant earlier in that day's proceedings, Mr. Hanlon said Mr. Wardlaw had no right to make remarks of this kind and they would not be entered in the official record. He repeated that he would have to have definite information about the type of road materials to be carried. The application by William Richardson's was refused.