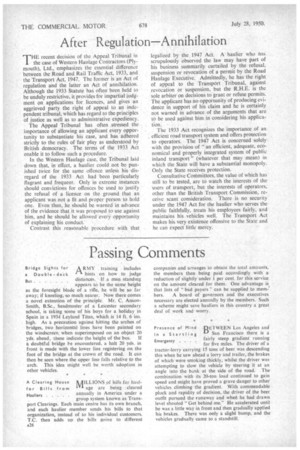 Page 28, 28th July 1950 — After Regulation Annihilation
Close
Noticed an error?
If you've noticed an error in this article please click here to report it so we can fix it.

THE recent decision of the Appeal Tribunal in the case of Western Haulage Contractors (Plymouth), Ltd., emphasizes the essential difference between the Road and Rail Traffic Act, 1933, and the Transport Act, 1947. The former is an Act of regulation and the latter an Act of annihilation. Although the 1933 Statute has often been held to be unduly restrictive, it provides for impartial judgment on applications for licences, and gives an aggrieved party the right of appeal to an independent tribunal, which has regard to the principles of justice as well as to administrative expediency.

• The Appeal Tribunal has often stressed the importance of allowing an applicant every opportunity to substantiate his case, and has adhered strictly to the rules of fair play as understood by British democracy. The terms of the 1933 Act enable it to follow such a procedure.

In the Western Haulage case, the Tribunal laid down that, in effect, a haulier could not be punished twice for the same offence unless his disregard of the 1933 Act had been particularly flagrant and frequent. Only in extreme instances should convictions for offences be used to justify the refusal of a licence on the ground that an applicant was not a fit and proper person to hold one. Even then, he should be warned in advance of the evidence that it was proposed to use against him, and he should be allowed every opportunity of explaining his conduct.

Contrast this reasonable procedure with that legalized by the 1947 Act. A haulier who has scrupulously observed the law may have part of his business summarily curtailed by the refusal, suspension or revocation of a permit by the Road Haulage Executive. Admittedly, he has the right of appeal to the Transport Tribunal, against revocation or suspension, but the R.H.E. is the sole arbiter on decisions to grant or refuse permits. The applicant has no opportunity of producing evidence in support of his claim and he is certainly not warned in advance of the arguments that are to be used against him in considering his application.

The 1933 Act recognizes the importance of an efficient road transport system and offers protection to operators. The 1947 Act is concerned solely with the provision of "an efficient, adequate, economical and properly integrated system of public inland transport" (whatever that may mean) in which the State will have a substantial monopoly. Only the State receives protection.

Consultative Committees, the value of which has still to be tested, are to watch the interests of the 'users of transport, but the interests of operators, other than the British Transport Commission, receive scant consideration. There is no security• under the 1947 Act for the haulier who serves the public faithfully, treats his employees fairly, and maintains his vehicles well. The Transport Act makes his very existence offensive to the State and he can expect little mercy.