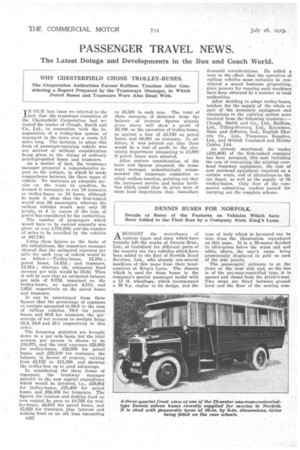 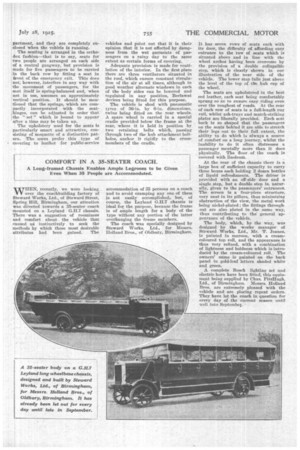 Page 20, 28th July 1925 — DENNIS BUSES FOR NORFOLK.
Close
Noticed an error?
If you've noticed an error in this article please click here to report it so we can fix it.

Details of Some of the Features on Vehicles Which have Been Added to the Fleet Run by a Company from King's Lynn.

AMONGST the motorbuses of various types and sizes which have recently left the works of Dennis Bros., Ltd., at Guildford for different parts of the country are two vehicles which have been added to the feet of Norfolk Road Services, Ltd., who already run several machines of this make from their headquarters at King's Lynn. The chassis which is used for these buses is the company's special passenger model with a 15 ft. wheelbase, which incorporates a 30 b.p. engine in its design, and the type of body which is favoured can be seen from the illustration reproduced on this page. It is a 29-seater finished in olive-green below the waist rail and white above, the user's name being prominently displayed in gold on each of the side panels.

The passengers' entrance is at the front on the near side and, as the bus is of the one-man-controlled type, it is opened and closed froin the driver's seat. Two steps are fitted between ground level and the floor of the seating cons partment, and they are completely enclosed when the vehicle is running.

The seating is arranged in the orthodox fashion--that is to say, seats for two people are arranged on each side of a central gangway, but provision is made for five passengers to be carried In the back row by fitting a seat in firent of the emergency exit. This does not, however, interfere in any way with the movement of passengers, for the seat itself is spring-balanced and, when not in use, assumes an approximately vertical position. It should be mentioned that the springs, which are compactly incorporated with the seathinges, can be adjusted in order that the " set " which is bound to appear after a time may be taken up.

The upholstery used for the seats is particularly smart and attractive, consisting of moquette of a distinctive patern. The users prefer this type of covering to leather for public-service

vehicles and point out that it is their opinion that it is not affected by dampness from the wet garments of passengers on a rainy, day to the same extent as certain forms of covering.

Adequate provision is made for ventilation of the interior. In the first place there are three ventilators situated in the roof, which ensure constant circulation of the air at all times, although in good weather alternate windows in each of the body sides can be lowered and regulated in any position, Beclawat devices being fitted for this purpose.

The vehicle is shod with pneumatic tyres of 36-in. by 6-in, dimensions, twins being fitted on the rear wheels. A spare wheel is carried in a special cradle provided below the frame at the rear, where it is held in position by two retaining bolts which, passing through two of the hub attachment boltholes anchor it rigidly to the crossmembers of the cradle.