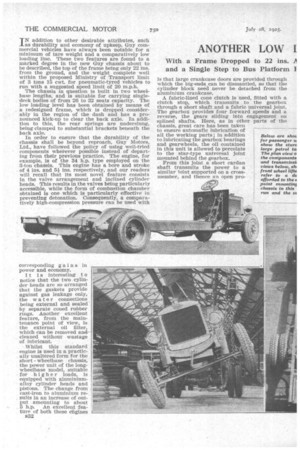 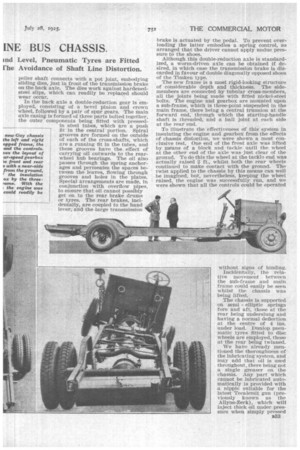 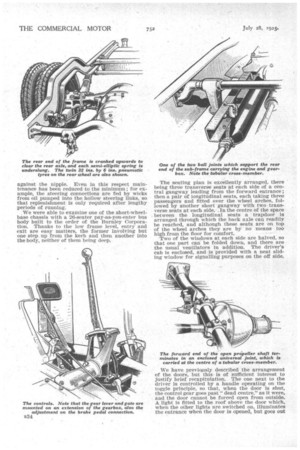 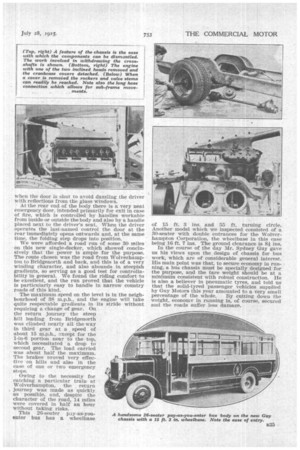 Page 16, 28th July 1925 — ANOTHER ' LOW
Close
Noticed an error?
If you've noticed an error in this article please click here to report it so we can fix it.

TN addition to other desirable attributes, such 1as durability and economy of upkeep, Guy commercial vehicles have always been notable for a minimum of tare weight and a comparatively low loading line. These two features are found to a marked degree in the new Guy chassis about to be described, the top of the frame being only 22 ins. from the ground, and the weight complete well within the proposed Ministry of Transport limit

of 3 tons 15 cwt. for pneunaatic-tyred vehicles to run with a suggested speed limit of 20 m.p.h.

The chassis in question is built in two wheelbase lengths, and is suitable for carrying singledeck bodies of from 26 to 32 seats capacity. The low loading level has been obtained by means of a redesigned frame, which is dropped considerably in the region of the dash and has a pronounced kick-up to clear the back axle. In addition to this, the rear springs are underslung, being clamped to substantial brackets beneath the back axle.

In order to ensure that the durability of the chassis shall be beyond reproach, Guy Motors, Ltd., have followed the policy of using well-tried components wherever possible instead of departing from their previous practice. The engine, for example, is of the 34 h.p. type employed on the 3-ton chassis. This engine has a bore and stroke of 4 ins. and 51p ins, respectively, and our readers will recall that its most novel feature consists In the valve arrangement and inclined cylinder heads. This results in the valves being particularly accessible, while the form of combustion chamber obtained is one which is particularly effective in preventing detonation. Consequently, a comparatively high-compression pressure can be used with corresponding gains in power and economy.

It is interesting t o notice that the two cylinder heads are so arranged that the gaskets provide against gas leakage only, the water connections being external and sealed' by separate coned rubber rings. Another excellent feature, from the maintenance point of view, is the external oil filter, which can be removed and cleaned without wastage of lubricant.

Whilst this standard • engine is used in a practically unaltered form for the • short wheelbase chassis, the power unit of the longwheelbase model, suitable for higher loads, is equipped with aluminiumalloy cylinder heads and pistons. The change from cast-iron to aluminium results in an increase of output amounting to about 5 h.p. An excellent feature of both these engines B32 is that large crankcase doors are provided through which the big-ends can be dismantled, so that the cylinder block need never be detached from the aluminium crankcase.

From this joint a short cardan shaft transmits the power to a similar ioint supported on a crossmember, and thence an open pro peller shaft connects with a pot joint, embodying sliding dies, just in front of the transmission brake on the back axle. The dies work against hardenedsteel slips, which can readily be replaced should wear occur.

In the back axle a double-reduction gear is em ployed, consisting of a bevel pinion and crown wheel, followed by a pair of spur gears. The main axle casing is formed of three parts bolted together, the outer components being fitted with pressedin steel tubes, which are a push fit in the central portion. Spiral grooves are formed on the outside of each of the cross-shafts, which are a running fit in the tubes, and these grooves have the. effect of carrying oil outwards to the rearwheel hub bearings. The oil also passes through the spring anchorages and permeates the spaces between the leaves, flowing through grooves and holes in the plates. Special arrangements are made, in conjunction with overflow pipes, to ensure that oil cannot possibly get on to the rear brake drums or tyres. The rear brakes, incidentally, are coupled to the hand lever, and the large transmission new Guy chassis the left and right opped frame, the and the controls. yes the layout of ur-speed gearbox w front and rear s with a near-side from the ground, the insulation ox by the three. rarne. With the the engine was could readily be brake is actuated by the pedal. To prevent overloading the latter embodies a spring control, so arranged that the driver cannot apply undue pressure to the shoes.

Although this double-reduction axle is standardized, a worm-driven axle can be obtained if desired, in which case the transmission brake is discarded in favour of double diagonally opposed shoes of the Timken type.

The new frame is a most rigid-looking structure of Considerable 'depth and thickness. The sidemembers are connected by tubular cross-members, all the joints being made with fitted nickel-steel bolts. The engine and gearbox are 'minuted upon a sub-frame, which is three-point suspended in the main frame, there being a central trunnion at the forward end, through which the starting-handle shaft is threaded, and a ball joint at each side at the rear end.

To illustrate the effectiveness of this system in insulating the engine and gearbox from the effects of chassis distortion, we were shown a most conclusive test. One end of the front axle was lifted by means of a block and tackle until the wheel at the other end of the axle was just clear of the ground. To do this the wheel at the tackla end was actually raised 2 ft., whilst both the rear wheels continued to make contact with the ground. The twist applied to the chassis by this means can well be imagined, but, nevertheless, keeping the wheel raised, the engine was successfully run, and we were shown that all the controls could be operated without signs of binding.

Incidentally, the relative movement between the sub-frame and main frame could easily be seen whilst the chassis was being lifted.

We have already mentioned the thoroughness of the lubricating system, and may add that oil is used throughout, there being not a single greaser on the chassis. Any part which cannot be lubricated automatically is provided with a nipple suitable for the latest Tecalemit gun (previously known as the Allyne-Zerk), which -will inject thick oil under pressure when simply pressed against the nipple. Even in this respect maintenance has been reduced to the minimum ; for example, the steering connections are fed by wicks from oil pumped into the hollow steering links, so that replenishment is only required after lengthy periods of running.

We were able to examine one of the short-wheelbase chassis with a 26-seater pay-as-you-enter bus body built to the order of the Burnley Corporadon. Thanks to the low frame level, entry and exit are easy matters, the former involving but one step up from the kerb and then another into the body, neither of them being deep. The seating plan is excellently arranged, there being three transverse seats at each side of a central gangway leading from the forward entrance ; then a pair of longitudinal seats, each taking three passengers and fitted over the wheel arches, followed by another short gangway with two transverse seats at each side. .In the centre of the space between the longitudinal seats a trapdoor is arranged through which the back axle can readily be reached, and although these seats are on top of the wheel arches they are by no means too high from the floor for comfort. " Two of the windows at each side are halved, so that one part can be folded down, and there are the usual ventilators in addition. The driver's cab is enclosed, and is provided with a neat sliding window for signalling purposes on tile off side.

We have previnusly described the arrangement of the doors, but this• is of sufficient interest to justify brief recapitulation. The one next to the driver is controlled by a handle operating on the toggle principle, so that, when the door is shut, the control gear goes past" dead centre," as it were, and the door cannot be forced open from outside. A light is fitted to the roof above the door which, when the other lights are switched on, illuminates the entrance when the door is opened, but goes out when the door is shut to avoid dazzling the driver With reflections from the glass windows. • At the rear end of the body there is a very neat emergency door, intended primarily for exit in case of lire, which is controlled by handles workable from inside or outside the body and also by a handle placed next to the driver's seat. When the driver operates the last-named control the door at the rear immediately opens outwards and, at the same time, the folding step drops into position.

We were afforded a road run of some 30 miles on this new single-decker, which showed conclusively that the power is ample for the purpose. The route chosen was the road from Wolverhampton to Bridgenorth and back, and this is of a very winding character, and also abounds in steepish gradients, so serving as a good test for controllability in general. We found the riding comfort 'to be excellent, and the run proved that the vehicle is particularly easy to handle in narrow country roads of this kind.

The maximum speed on the level is in the neighbourhood of 38 m.p.h., and the engine will "take quite respectable gradients in its stride without requiring a change of gear. On the return journey the steep hill leading from Bridgenorth was climbed nearly all the way in third gear at a speed of about 15 m.p.h., except for the 1-in-6 portion near to the top, which necessitated a drop to second gear. The load carried was about half the maximum. The brakes proved very effective on hills and also in the case of one or two emergency stops.

Owing to the necessity for catching a particular train at Wolverhampton, the return , journey was made as quickly as possible, and, despite the character of the road, 14 miles were covered in half an hour without taking risks.

This 26-seater pay-as-youenter bus has a wheelbase of 15 ft. 3 ins. and 55 ft. turning circle. Another model which we inspected consisted of a 30-seater with double entrances for the Wolverhampton Corporation, the wheelbase in this case being 16 ft. 7 ins. The ground clearance is 84 ins.

In the course of the day Mr. Sydney Guy gave us his views upon the design of chassis for bus• work, which are of considerable general interest. His main point was that, to secure economy in run• ning, a bus chassis must be specially designed for the purpose, and the tare weight should be at a minimum consistent with robust construction. He is also a believer in pneumatic tyres, and told us that the solid-tyred passenger vehicles supplied by Guy Motors this year amounted to a very small percentage of the whole. By cutting down the weight, economy in running is, of course, secured and the roads suffer less damage.