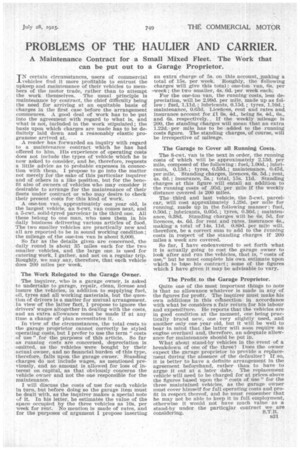 Page 15, 28th July 1925 — PROBLEMS OF THE HAULIER AND CARRIER.
Close
Noticed an error?
If you've noticed an error in this article please click here to report it so we can fix it.

A Maintenance Contract for a Small Mixed Fleet. The Work that can be put out to a Garage Proprietor.

IN certain circumstances, users of commercial vehicles find it more profitable to entrust the upkeep and maintenance of their vehicles to mem

bers of the motor trade, rather than to attempt the work themselves. The usual principle is maintenance by contract, the chief difficulty being the need for arriving at an equitable basis of charges in the first case before the arrangement commences. A good deal of work has to be put into the agreement with regard to what is, and what is not, included in the work stipulated ; the basis upon which charges are made has to be definitely laid down and a reasonably elastic programme arrived at.

A reader has forwarded an inquiry with regard to a maintenance contract which he has had offered to him. Ills experience of operating costs does not include the types of vehicle which he is now asked to consider, and he, therefore, requests a little advice as to probable expenses In connec

tion with them. I propose to go into the matter not merely for the sake of this particular inquirer

and of others in a like position, but for the benefit also of owners of vehicles who may consider it desirable to arrange for the maintenance of their fleets under contract or who may desire to check their present costs for this kind of work.

A one-ton van, approximately one year old, is the largest vehicle, an 8-cwt. van comes next, and a 5-cwt. solid-tyred parcelcar is the third one. All these belong to one man, who uses them in his daily business delivering various articles of food. The two smaller vehicles are practically new and all are reported to be in sound working condition ; the mileage of the one-ton van is about 8,000.

So far as the details given are concerned, the daily round is about 35 miles each for the two smaller vehicles, and the large one is used for catering work, I gather, and not on a regular trip. Roughly, we may say, therefore, that each vehicle does 200 miles per week.

The Work Relegated to the Garage Owner.

The inquirer, who is a garage owner, is asked to undertake to garage, repair, clean, license and Insure the vehicles, in addition to supplying fuel, oil, tyres and all working materials, but the question of drivers is a matter for mutual arrangement. In view of the latter fact, I propose to ignore the drivers' wages altogether in dealing with the costs, and an extra allowance must be made if at any time a change of plan necessitates it.

In view of the circumstances, the total costs to the garage proprietor cannot Correctly be styled operating costs, but I prefer to use the term "costs of use" , for the purposes of this article. So far as running costs are concerned, depreciation is omitted, as the vehicles were bought by their actual owner, and no financial burden of this type, therefore, falls upon the garage owner. Standing charges do not include wages, as mentioned previously, and no amount is allowed for loss of interest on capital, as that obviously concerns the vehicle owner and not the one responsible for the maintenance.

I will discuss the costs of use for each vehicle In turn, but before doing so the garage item must be dealt with, as the inquirer makes a special note ef. it. In his letter, he estimates the value of the space occupied by the three vehicles as 10s. per week for rent. No mention is made of rates, and for the purposes of argument I propose inserting

an extra charge of 5s. on this account, making a total of 15s. per week. Roughly, the following charges will give this total : one-ton van, Os. per -week; the two smaller, 4s. 6d, per week each:

The Garage to Cover all Running Costs. •

So far, I have endeavoured to set forth what it is actually going to cost the garage owner to look after and run the vehicles, that is, "costs of use," but he must complete his own estimate upon wlaich to be his contract; • some of the .figures which I have given it may be advisable to vary.

The Profit to the Garage Proprietor.

Quite one of the most important things to note is that no allowance whatever is made in any of the figures for profit. The inquirer must make his own additions in this connection in accordance with what he considers a fair return for his labour and expenditure. He reports that the vehicles are in good condition at the moment, one being practically brand new, one , very slightly used, and another only one year old, but it will be well to bear in mind that the latter will soon require an engine overhaul and, therefore, an adequate allowance for maintenance should be Put in.

What about stand-by vehicles in the event of a breakdown of one of the three? Does the owner expect the garage proprietor to provide a replace-inent during the absence of the defaulter? If so, it is better to have a definite arrangement in the agreement beforehand, rather than to have to argue it out at a later date. The replacement vehicle will need to be charged for at prices above the figures based upon the "costs of use" for the three maintained vehicles, as the garage owner must cover himself for full operating costs and profit in respect thereof, and he must remember that he may not be able to keep it in full employment, otherwise it would not have much value as a stand-by under the particular contract we are