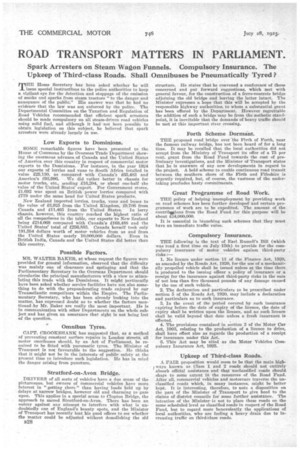 pHE Home Secretary has been asked whether he will issue special instructions to the police authorities to keep a vigilant eye for the detection and stoppage of the emission of smoke and sparks from steam tractors "to the danger and annoyance of the public." His answer was that he had DO evidence that the law was not enforced by the police. The Departmental Committee on the Taxation and Regulation of Road Vehicles recommended that efficient spark arresters should be made compulsory on all steam-driven road vehicles using solid fuel, and although it had not been possible to obtain legislation on this subject, he believed that spark arresters were already largely in use.

SOME remarkable figures have been presented to the Relief of Commons by the Overseas Trade Department showing the enormous advance of Canada and the United States of America over this country in respect of commercial motor exports to the Dominions. For instance, in the year 1924 our exports of lorries mid vans to -South Africa totalled in value £25,130, as compared with Canada's £65,483 and America's £93,096. We did rather better in chassis for motor trucks, etc., sending £16,204, or about one-halt the ralne of the United States' export. For Government stores, £1.692 was spent on British power lorries compared with £779 under the same head for United States products..

MR. WALTER BAKER, at whose request the figures were provided for general information, observed that the difficulty was mainly one of clearance and springing and that the Parliamentary Secretary to the Overseas Department should circularize the principal manufacturers with a view to stimulating this trade with the Dominions. It might pertinently have been asked whether service facilities have net also something to do with the preponderating trade enjoyed by our Transatlantic competitors within the Empire. The Parliamentary Secretary, who has been already looking into the matter, has expressed doubt as to whether the factors mentioned by Mr. Baker are really the most important. He is in communication with other Departments on the whole subject and has given an assurance that sight is not being lost of the question.

CAPT. CROORSHANK has suggested that, as a method of preventing constant surface repairs in London streets, all motor omnibuses should, by an Act of Parliament, be required to be fitted with pneumatic tyres. The Miniater of Transport is not favourable to the suggestion. He thinks that it might not he in the interests of public safety at the present time to introduce such legislation. He has in mind the danger arising from puncture.

DRIVERS of all sorts of vehicles have a due sense of the picturesaue, but owners of commercial vehicles have more interest in "getting there" than having loads held up by delays at narrow bridges, however old and charming to gaze upon. This applies in a special sense to Clopton Bridge, the approach to sacred Stratford-on-Avon. There has been an outcry against any attempt to interfere with what is undoubtedly one of England's beauty spots, and the Minister of Transport has recently lent his good offices to see whether the matter could be adjusted without demolishing the old

structure. He states that he convened a conference of those concerned and put forward suggestions, which met with general favour, for the construction of a ferro-concrete bridge adjoining the old bridge and leaving the latter intact. The Minister expresses a hope that this will be accepted by the responsible highway authorities, to whom a substantial grout has been offered by the Department. However regrettable the addition of such a bridge may be from the aesthetic standpoint, it is inevitable that the demands of heavy traffic should be met at this important river crossing.

THE proposed road bridge over the Firth of Forth, near the famous railway bridge, has not been heard of for a long time. It may be recalled that the local authorities did not accept from the Ministry of Transport its offer of a 75 per cent. grant from the Road Fund towards the coat of preliminary investigations, and the Minister of Transport states that he is unaware of any new developments in regard to the project. A bold scheme to enable continuous road transit between tha southern shore of the Firth and Eifeshire is urgently required, but, of course, the vastness of the undertaking precludes hasty commitments.

THE policy of helping unemployment by providing work on road schemes has been further developed" and certain programmes of work are to be expedited. The amount of the contribgtions from the Read Fund for this purpose will be about £34,000,000.

It is essential in launching such schemes that they must have an immediate traffic value.

THE following is the text of Earl Russell's Bill (which was read a first time on July 15th) to provide for the compulsory insurance of motor vehicles against third-party risks:— 1. No licence under section 13 of the Finance Act, 1020, as amended by the Roads Act, 1920, for-the use of a mechanieally propelled vehicle shall be issued unless at the time there is produced to the issuing officer a policy of insurance or a receipt for the insurance against third-party risks in the sum of not less than five thousand pounds of any damage caused by the use of such vehicle. .

5. This Act may be cited as the Motor Vehicles Compulsory Insurance Act, 1925.

A FAIR proposition would seem to he that the main highways known as Class 1 and 2 roads should not entirely absorb official assistance and that unclassified roads should. share to some extent in the resources of the Road Fund. After all, commercial vehicles and motorcars traverse the unclassified roads which, in many instances, might be better kept. It is interesting, therefore, to note a disposition on the part of the. Minister of Transport to girt heed to the claims of district councils for some further assistance. The intention of the Minister is not to place these roads on the same scheduled level as classified reads in respect of the Road Fund, but to regard more benevolently the applications of local authorities, who are feeling a heavy drain due to increasing traffic on third:class roads.