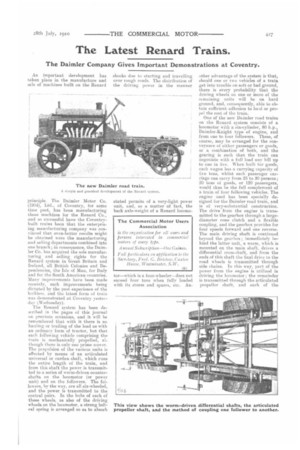 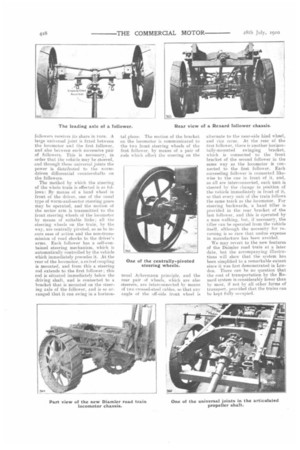 Page 5, 28th July 1910 — The Latest Renard Trains.
Close
Noticed an error?
If you've noticed an error in this article please click here to report it so we can fix it.

An important development. has taken place in the manufacture and sale of machines built on the Renard

principle. The Daimler Motor Co. (1.904), Ltd., of Coventry, for some time past, has been manufacturing these machines for the Renard Co., and so successful have the Coventrybuilt trains been that the enterprising manufacturing company was convinced that even-better results might be obtained were the manufacturing and selling departments combined into one branch; in consequence, the Daimler Co. has acquired the sole manufacturing and selling rights for the Renard system in Great Britain and Ireland, all British Colonies and Dependencies, the Isle of Man, for Italy and for the South American countries. Many improvements have been made recently, such improvements being dictated by the past. experience of the builders: and the latest form of train wits demonstrated at Coventry yesterday (Wednesday).

The Renard system has been described in the pages of this journal on previous occasions, and it will be remembered that with it there is no hauling or trailing of the load as with an ordinary form of tractor, but that each following vehicle comprising the train is mechanically propelled, although there is only one prime mover. The propulsion of the various units is effected by means of an articulated universal or cardan, shaft, which runs the entire length of the train, and from this shaft the power is transmitted to a series of worm-driven countershafts on the locomotor (or power unit.) and on the followers. The followers, by the way, are all six-wheeled, and the power is transmitted to the central pairs. In the hubs of each of these wheels, as also of the driving wheels on the locomotor, a strong helical spring is arranged so as to absorb shocks due to starting and travelling over rough roads. The distribution of the driving power in the manner stated permits of a. very-light power unit, and, as a. matter of fact, the hack axle-weight of a Renard loconio tor—which is a four-wheeler—does not exceed four tons when fully loaded with its stores and spares, etc. An other advantage of the system is that, should one or two vehicles of a train get into trouble on soft or bad ground, there is every probability that the driving wheels on one or more of the remaining units will be on hard ground, and, consequently, able to obtain sufficient, adhesion to haul or propel the rest of the train.

One of the new Daimler road trains on the Renard system consists of a locomotor With a six-cylinder, 80 h.p., Daimler-Knight type of engine, and from one to four followers. These, of course, may be arranged for the conveyance of either passengers or goods, or a. combination of both, and the gearing is such that the train can negotiate with a full load any hill up to one in live. When built for goods, each wagon has a carrying capacity of live tons, whilst each passenger carriage can carry from 2 to 30 persons ; '20 tons of goods, or 120 passengers, would thus be the full complement of a train, of four following vehicles. The engine used has been specially de.signed for the Daimler road train, and is of very-substantial construction. The drive from the engine is transmitted to the gearbox through a largediameter cone clutch and a flexible coupling, and the gearbox provides for four speeds forward and one reverse. The main driving shaft is continued beyond the gearbox ; immediately behind the latter unit, a worm, which is mounted on the main shaft, drives a differential cross-shaft, and from the ends of this shaft the final drive to the road wheels is transmitted through side chains. In this way, part of the power from the engine is utilized in driving the loeomotor ; the remainder is transmitted through the articulated propellor shaft, and each of the followers receives its share in turn. A large universal joint is fitted between the locomotor and the first follower, and also between each successive pair of followers. This is necessary, in order that the vehicle may be steered, and through these universal joints the power is distributed to the wormdriven differential countershafts on the followers.

The method by which the steering of the whole train is effected is as follows: By means of a hand wheel in front of the driver, one of the usual type of worm-and-sector steering gears may be operated, and the motion of the sector arm is transmitted to the front steering wheels of the locomotor by means of suitable links; all the steering wheels on the train, by the way, are centrally pivoted, so as to insure ease of action and the non-transmission of road shocks to the driver's arms. Each follower has a self-contained steering mechanism, which is automatically controlled by the vehicle which immediately precedes it. At the rear of the locomotor, a swivel coupling is mounted, and from this a steering rod extends to the first follower ; this rod is situated immediately below the driving shaft, and is connected to a bracket that is mounted on the steering axle of the follower, and is so arranged that it can swing in a horizon

tal plane. The motion of the bracket on the locomotor is communicated to the two front steering wheels of the first follower, by means of a pair of rods which effect the steering on the usual Ackermann principle, and the rear pair of wheels, which are also steerers, are interconnected by means of two crossed-steel cables, so that any angle of the off-side front wheel is

alternate to the near-side hind wheel, and rice versa. At the rear of the first follower, there is another horizontally-mounted swinging bracket, which is connected to the front bracket of the second follower in the same way as the locomotor is connected to the first follower. Each succeeding follower is connected likewise to the one in front of it, and, ns all are interconnected, each unit is steered by the change in position of the vehicle immediately in front of it, so that every unit of the train follows the same track as the locomotor. For steering backwards, a hand tiller is provided in the rear bracket of the last follower, and this is operated by a man walking, but, if necessary, the tiller can be operated from the vehicle itself, although the necessity for reversing is so rare that undue expense in manufacture has been avoided.

We may revert to the new features of the Daimler road train at a later date, but the accompanying illustrations will show that the system has been simplified to a remarkable extent since it was first demonstrated in London. There can be no question that the cost of transportation by the Renard system is considerably lower than by most, if not by all other forms of transport, provided that the trains can be kept fully occupied.