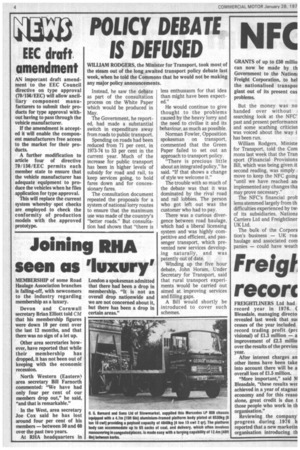 WILLIAM RODGERS, the Minister for Transport, took most of the steam out of the long awaited transport policy debate last week, when he told the Commons that he would not be making any major policy announcements.

Instead, he saw the debate as part of the consultation process on the White Paper which would be produced in May.

The Government, he reported, had made a substantial switch in expenditure away from roads to public transport.

Spending on roads had been reduced from 71 per cent, in 1973-74 to 53 per cent in the current year. Much of the increase for public transport has been in higher levels of subsidy for road and rail, to keep services going, to hold fares down and for concessionary fares.

The consultation document repeated the proposals for a system of national lorry routes to ensure that the maximum use was made of the country's "better roads." But consultation had shown that "there is less enthusiasm for that idea than might have been expected."

He would continue to give thought to the problems caused by the heavy lorry and the need to civilise it and its behaviour, as much as possible.

Norman Fowler, Opposition spokesman on transport, commented that the Green Paper failed to set out an approach to transport policy.

"There is precious little about an integrated policy," he said. "If that shows a change of style we welcome it."

The trouble with so much of the debate was that it was dominated by the rival road and rail lobbies. The person who got left out was the customer who had to pay.

There was a curious divergence between road haulage, which had a liberal licensing system and was highly competitive and efficient, and passenger transport, which prevented new services developing naturally, and was patently out of date.

Winding up the five hour debate, John Horam, Under Secretary for Transport, said that rural transport experiments would be carried out aimed at improving services and filling gaps.

A Bill would shortly be introduced to cover such schemes.