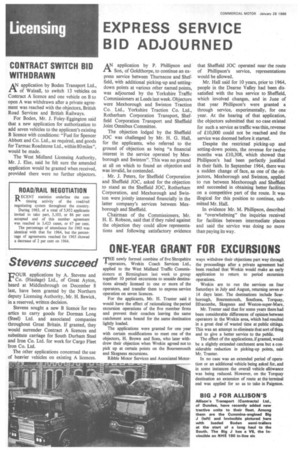 Al application by Boden Transport Ltd., of Walsall, to switch 13 vehicles on Contract A licence and one vehicle on B to open A was withdrawn after a private agreement was reached with the objectors, British Road Services and British Railways.

For Boden, Mr. J. Foley-Eggington said that a new application for authorization to add seven vehicles to the applicant's existing B licence with conditions: "Fuel for Spencer Abbott and Co. Ltd., as required, and goods for Tarmac Roadstone Ltd., within 80 miles", would be made.

The West Midland Licensing Authority, Mr. J. Else, said he felt sure the amended application would be granted when received, provided there were no further objectors.