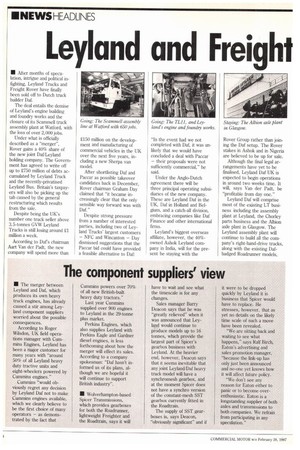 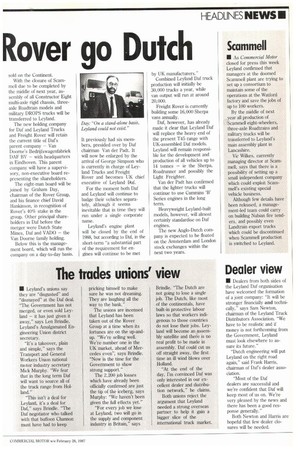 • After months of speculation, intrigue and political infighting, Leyland Trucks and Freight Rover have finally been sold off to Dutch truck builder Daf.

The deal entails the demise of Leyland's engine building and foundry works and the closure of its Scamrnell truck assembly plant at Watford, with the loss of over 2,000 jobs.

Under what is officially described as a "merger", Rover gains a 40% share of the new joint Daf/Leyland holding company. The Government has agreed to write off up to .2750 million of debts accumulated by Leyland Truck and the recently-privatised Leyland Bus. Britain's taxpayers will also be picking up the tab caused by the general restructuring which results from the sale.

Despite being the UK's number one truck seller above 3.5-tonnes GVW Leyland Trucks is still losing around .E1 million a week.

According to Dafs chairman Aart Van der Padt, the new company will spend more than £150 million on the development and manufacturing of commercial vehicles in the UK over the next five years, including a new Sherpa van model.

After shortlisting Daf and Paccar as possible takeover candidates back in December, Rover chairman Graham Day claimed that "it became increasingly clear that the only sensible way forward was with Daf."

Despite strong pressure from a number of interested parties, including two of Leyland Trucks' largest customers — NFC and Wincanton — Day dismissed suggestions that the Paccar bid could have provided a feasible alternative to Daf: "In the event had we not completed with Daf, it was unlikely that we would have concluded a deal with Paccar — their proposals were not sufficiently commercial," he said.

Under the Anglo-Dutch agreement there will be three principal operating subsidiaries of the new company. These are Leyland Daf in the UK, Daf in Holland and Belgium, and a catch-all division, embracing companies like Daf Finance and other international firms.

Leyland's biggest overseas affiliate, however, the 40%owned Ashok Leyland company in India, will for the present be staying with the Rover Group rather than joining the Daf setup. The Rover stakes in Ashok and in Nigeria are believed to be up for sale.

Although the final legal arrangements have yet to be finalised, Leyland Daf UK is expected to begin operations in around two weeks time. It will, says Van der Padt, be "profitable from day one."

Leyland Daf will comprise most of the existing LT business including the assembly plant at Leyland, the Chorley parts business and the Albion axle plant in Glasgow. The Leyland assembly plant will continue to build all the company's right-hand-drive trucks, along with the existing Dafbadged Roadrunner models, sold on the Continent.

With the closure of Scammelt due to be completed by the middle of next year, assembly of all Constructor Eight multi-axle rigid chassis, threeaxle Roadtrain models and military DROPS trucks will be transferred to Leyland.

The new holding company for Daf and Leyland Trucks and Freight Rover will retain the current title of Daf s parent company — Van Doorne's Bedrijfswagenfabriek DAF BV — with headquarters in Eindhoven. This parent company will have a supervisory, non-executive board representing the shareholders.

The eight-man board will be joined by Graham Day, chairman of the Rover Group, and his finance chief David Hankinson, in recognition of Rover's 40% stake in the group. Other principal shareholders in Daf before the merger were Dutch State Mines, Daf and VADO — the Van Doorne family holding.

Below this is the management board, which will run the company on a day-to-day basis. It previously had six members, presided over by Daf chairman Van der Padt. It will now be enlarged by the arrival of George Simpson who is currently in charge of Leyland Trucks and Freight Rover and becomes UK chief executive of Leyland Daf.

For the moment both Daf and Leyland will continue to badge their vehicles separately, although it seems inevitable that in time they will run under a single corporate name.

Leyland's engine plant will be closed by the end of 1988, but according to Daf, in the short-term "a substantial part of the requirement for engines will continue to be met by UK manufacturers."

Combined Leyland Daf truck production will initially be 30,000 trucks a year, while van output will run at around 20,000.

Daf, however, has already made it clear that Leyland Daf will replace the heavy end of the present T45 range with UK-assembled Daf models. Leyland will remain responsible for the development and production of all vehicles up to 14 tonnes — ie the Sherpa, Roadrunner and possibly the Light Freighter.

Van der Padt has confirmed that the lighter trucks will continue to use Cummins 'B' Series engines in the long term.

The new Anglo-Dutch company is expected to be floated on the Amsterdam and London stock exchanges within the next two years.