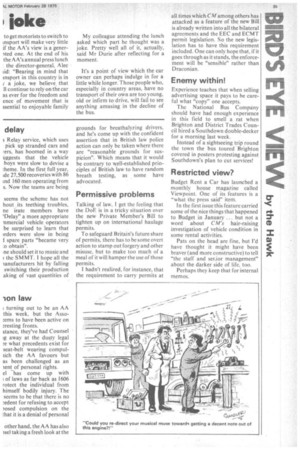 Page 37, 28th February 1975 — I joke
Close
Noticed an error?
If you've noticed an error in this article please click here to report it so we can fix it.

to get motorists to switch to insport will make very little if the AA's view is a gener)ted one. At the end of his the AA's annual press lunch the director-genera Alec "Bearing in mind that insport in this country is in of a joke, we believe that 11 continue to rely on the car as ever for the freedom and ence of movement that is ssential to enjoyable family

s Relay service, which uses pick up stranded cars and /ers, has boomed in a way uggests that the vehicle boys were slow to devise a ;heme. In the first full year, ;de 27,500 recoveries with 86 ind 160 men operating from s. Now the teams are being seems the scheme has not hout its teething troubles, ne irate members have 'Delay" a more appropriate mmercial vehicle operators be surprised to learn that nylers were slow in being spare parts "became very .0 obtain".

ne should set it to music and the SM MT. I hope all the tanufacturers hit by falling switching their production aking of vast quantities of

; turning out to be an AA this week, but the Asso.Tms to have been active on .tresting fronts.

stance, they've had Counsel Ig away at the dus,ty legal .te what precedents exist for seat-belt wearing compuliich the AA favours but as been challenged as an tent .of personal rights. el has come up with ; of laws as far back as 1606 rotect the individual from himself bodily injury. The seems to be that there is no ;edent for refusing to accept 3osed compulsion on the that it is a denial of personal other hand, the AA has also 'mei taking a fresh look at the My colleague attending the lunch asked which part he thought was a joke. Pretty well all of it, actually, said Mr Dune after reflecting for a moment.

It's a point of view which the car owner can perhaps indulge in for a tittle while longer. Those people who, especially in country areas, have no transport of their own are too young, old or infirm to.drive, will fail to see anything amusing in the decline of the bus.

grounds for breathalyzing drivers, and he's come up with the confident assertion that in British law police action can only be taken where there are "reasonable grounds for suspicion". Which means that it would be contrary to %yell-established principles of British law to have random breath testing, as some have advocated.

Talking of law, I get the feeling that the DoE is in a tricky situation over the new Private Member's Bill to tighten up on international haulage permits.

To safeguard Britain's future share of permits, there has to be some overt action to stamp out forgery and other misuse, but to make too much of a meal of it will hamper the use of those permits.

I hadn't realized, for instance, that the requirement to carry permits at all times which CM among others has attacked as a feature of the new Bill is already written into all the bilateral agreements and the EEC and ECMT permit legislation. So the new legislation has to have this requirement included. One can only hope that, if it goes through as it stands, the enforcement will be "sensible" rather than Draconian.

Experience teaches that when selling advertising space it pays to be careful what "copy" one accepts.

The National Bus Company should have had enough experience in this field to smell a rat when Brighton and District Trades Council hired a Southdown double-decker for a morning last week.

Instead of a sightseeing trip round the town the bus toured Brighton covered in posters protesting against Southdown's plan to cut services!

Budget Rent a Car has launched a monthly house magazine called Viewpoint. One of its features is a "what the press said" item.

In the first issue this feature carried some of the nice things that happened to Budget in January ... but not a word about CM's hair-raising investigation of vehicle condition in some rental activities.

Pats on the head are fine, but I'd have thought it might have been braver (and more constructive) to tell "the staff and ser.ior management" about the darker side of life, too.

Perhaps they keep that for internal memos.