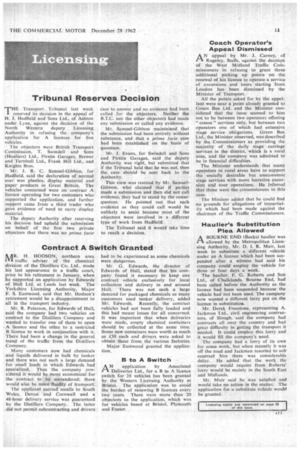 reserved its decision in the appeal of H. .1: Hadfield and Sons Ltd., of Ashton under Lyne, against the decision of the North Western deputy Licensing Authority in. refusing the company's. application for A licences for . five vehicles.

Mr. J. R. C. Samuel-Gibbon, for Hadfield, said the declaration of normal user was plastics, display material and paper products in Great Britain. The vehicles concerned were on contract A licence operating for two customers who supported the application, and further support came from a .third trader who gave evidence of need to carry display material.

case to answer and no evidence had been called for the Objectors. Neither the B.T.C. nor the other objectors had made any submission or called any evidence.

Mr. Samuel-Gibbon maintained that the submission had been entirely without substance, and that a prima facie case had been established on the basis of quantum.

Mr. J. Evans, for Swindell and Sons and Firstin Garages, said the deputy Authority was right, but submitted that if the Tribunal held that he was not, then the case should be sent back to the Authority.

This view was resiSted by Mr. SamuelGibbon, who claimed that if parties made a submission and then did not call evidence, they had to standby the consequences. He pointed out that such evidence as they could call would be unlikely to assist because most of the objectors were involved in a different type of work from Hadfield'.

The Tribunal said it would take time to reach a decision.